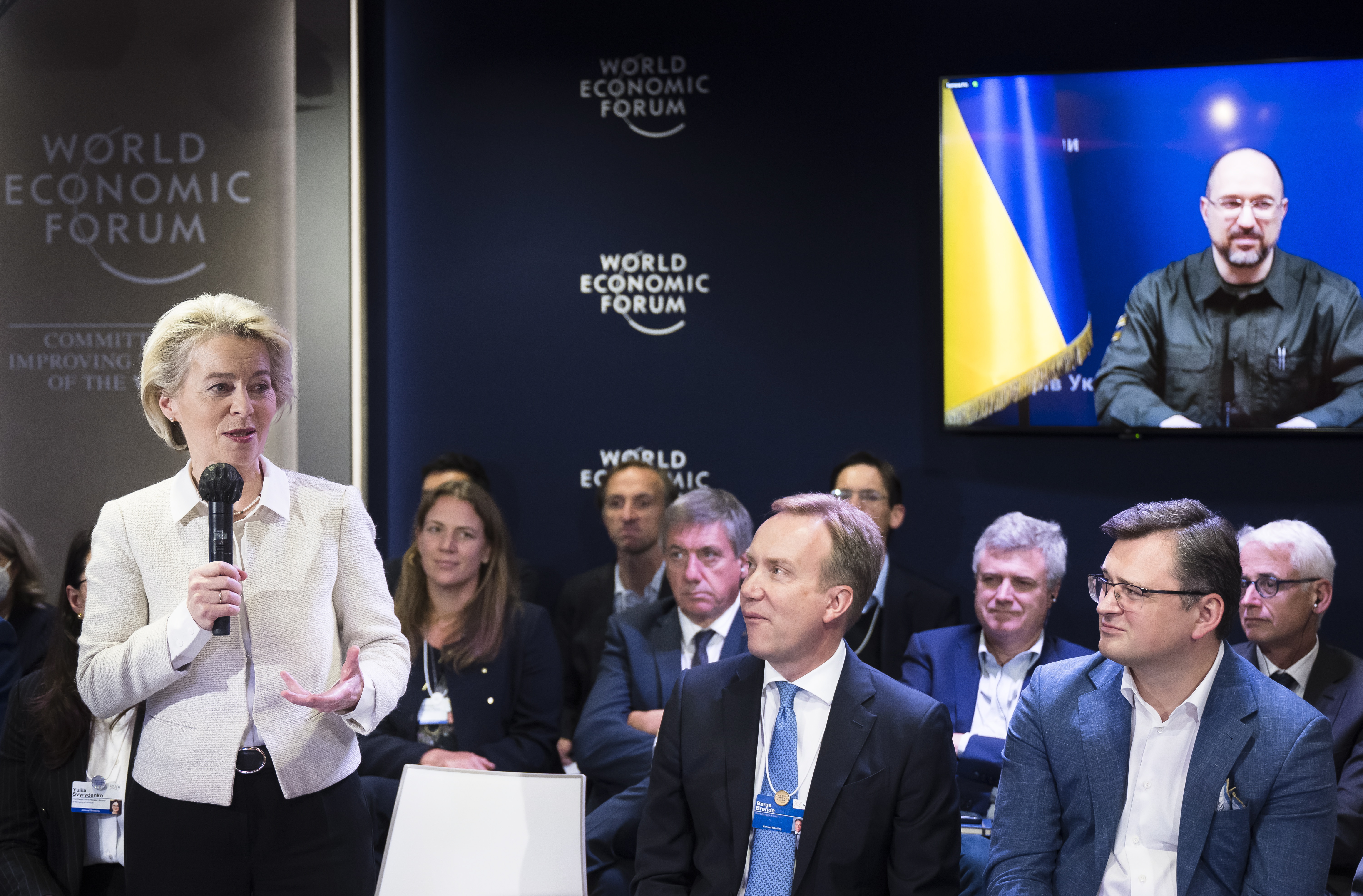 The European Union is actively working to advance the reconstruction of Ukraine, despite the fact that the country is still immersed in a war due to the Russian invasion. It is, moreover, what the president of Ukraine, Volodímir Zelenski, was asking for before the World Economic Forum (WEF) this week, who also encouraged companies to participate in the donor conference that Brussels has organized to next month in Lugano (Switzerland). The objective is to raise funds and establish a joint platform between the European Commission and the Government of kyiv for the reconstruction of the country. But the EU wants to go further.

The president of the European Commission, Ursula von der Leyen, pointed this out during her speech at the Davos Forum last Tuesday. “It’s not just about undoing the damage of the destructive fury of [Vladímir] Putin. It is also about building the future that the Ukrainians have chosen for themselves,” he stressed. That translates, as explained by the president, in accompanying the financing with “ambitious reforms, such as the modernization of the administration, the firm establishment of the rule of law and the independence of its judiciary; the fight against corruption and the oligarchs and the construction of a fair, sustainable and competitive economy”. The President of the European Executive believes that this “will strongly help Ukraine on its European path”, which is where the country belongs, she said.

Through this joint platform, which has already been informally dubbed the Marshall Plan for Ukraine, the EU wants to call on countries as well as international financial institutions and the private sector to provide financing. “We need everyone on board. (…) And we must leave no stone unturned, including, if possible, the use of Russian assets,” Von der Leyen said.

In his speech by videoconference before the Forum, Zelensky put figures on the country’s needs. “We need 5,000 million dollars [unos 4.660 millones de euros] a month to function, finance the war and create a fund for the reconstruction of the country,” he said.

The truth is that the experience of the EU with the drift of countries such as Poland and Hungary in the area of ​​the rule of law, among others, once as full members, can largely explain the Commission’s insistence on its claims . “Reforms and investment must go hand in hand in the case of Ukraine. There is no doubt that the country is well placed to qualify for candidate status, but we must not lower the standards we have achieved in the EU. We are the example that it is possible to meet high standards and that it works”, declared the Slovak Prime Minister, Eduard Heger, in a round table, clearly supporting the positions of Von der Leyen.

But not everyone agrees with that path, which could eventually set back Ukraine’s accession progress if it fails to adopt reforms. “I am absolutely convinced that Ukraine can be a candidate country for EU membership,” said the President of the European Parliament, Roberta Metsola, with the assent of the Latvian President, Egils Levits, at her side at a breakfast organized by the oligarch Ukrainian Victor Pinchuk, very active in Davos. “In the European Parliament we believe that if a country shares the fundamental values ​​and principles on which Europe is based and fights for them, why should Europe not throw its doors wide open to that country? Why do we have to hide behind different laws for decades again? It is just a matter of political will,” Metsola said. In her opinion, it is possible to discuss the steps of different countries on the way to the EU, but the door must be opened for Ukraine.

“If we are serious and we are serious about our principles, there is no way to say that Ukraine does not belong to Europe, and then there are technical questions about how to do it. But candidate status is the beginning of the process,” Levits noted Wednesday. “It is the starting point, and we should give it to Ukraine. I think it’s realistic, it’s possible, and it’s also in our interest,” he said.

Many voices have expressed support for Ukraine’s future accession to the European project, but not all with the same degree of enthusiasm. “Accession to the EU was one of the moments of greatest progress and transformation of Ireland, not only from an economic point of view. I can’t tell other countries that they can’t have that opportunity, but I think that integration should start with countries that are already waiting in the Balkans and be built on shared values”, declared the Irish Prime Minister, Micheál Martin.

There are also, of course, those who rule out using the fast track for Ukraine, war or no war. Like the Prime Minister of the Netherlands, Mark Rutte, who declared shortly before that Ukraine’s chances of becoming a candidate country for the EU “are not very great”. A condition that kyiv aspires to acquire this same month of June.

Shireen Abu Akleh: The US investigation into the death of the Palestinian journalist is falsely closed due to the poor condition of the bullet | International

Check Also
Close
Pedro Castillo: a year and a half adrift in Peru | International
23 mins ago

Vacancy: The Peruvian military turned its back on Castillo | International
44 mins ago

A terrorist attack on a market causes several deaths and 28 wounded in eastern Afghanistan | International
June 20, 2022

The mayor of Severodonetsk, the city that is fighting inch by inch against the Russians: “There are many Mariupol in Ukraine” | International
June 10, 2022

The mayor of Severodonetsk, the city that is fighting inch by inch against the Russians: “There are many Mariupol in Ukraine” | International

Grozny Doctrine: Putin applies in Ukraine the model of brutality that he tried in Chechnya | International
April 6, 2022

Grozny Doctrine: Putin applies in Ukraine the model of brutality that he tried in Chechnya | International

Brazil Election Results: Bolsonarismo Shows Its Strength and the Brazilian Congress Will Continue with a Conservative Majority | International
October 3, 2022

Brazil Election Results: Bolsonarismo Shows Its Strength and the Brazilian Congress Will Continue with a Conservative Majority | International

Gabriela Sevilla: No baby, no pregnancy, no kidnapping: the case that kept Peru on edge never existed | International
October 27, 2022

Gabriela Sevilla: No baby, no pregnancy, no kidnapping: the case that kept Peru on edge never existed | International

Cristina Kirchner: The attack against Fernández leads to a review of the security of Lula and Bolsonaro in Brazil | International
September 3, 2022

Cristina Kirchner: The attack against Fernández leads to a review of the security of Lula and Bolsonaro in Brazil | International

The US and South Korea respond with missile fire to the North Korean launch | International
October 5, 2022

Russia accentuates repression with the arrest of a former mayor critical of the war | International
August 24, 2022