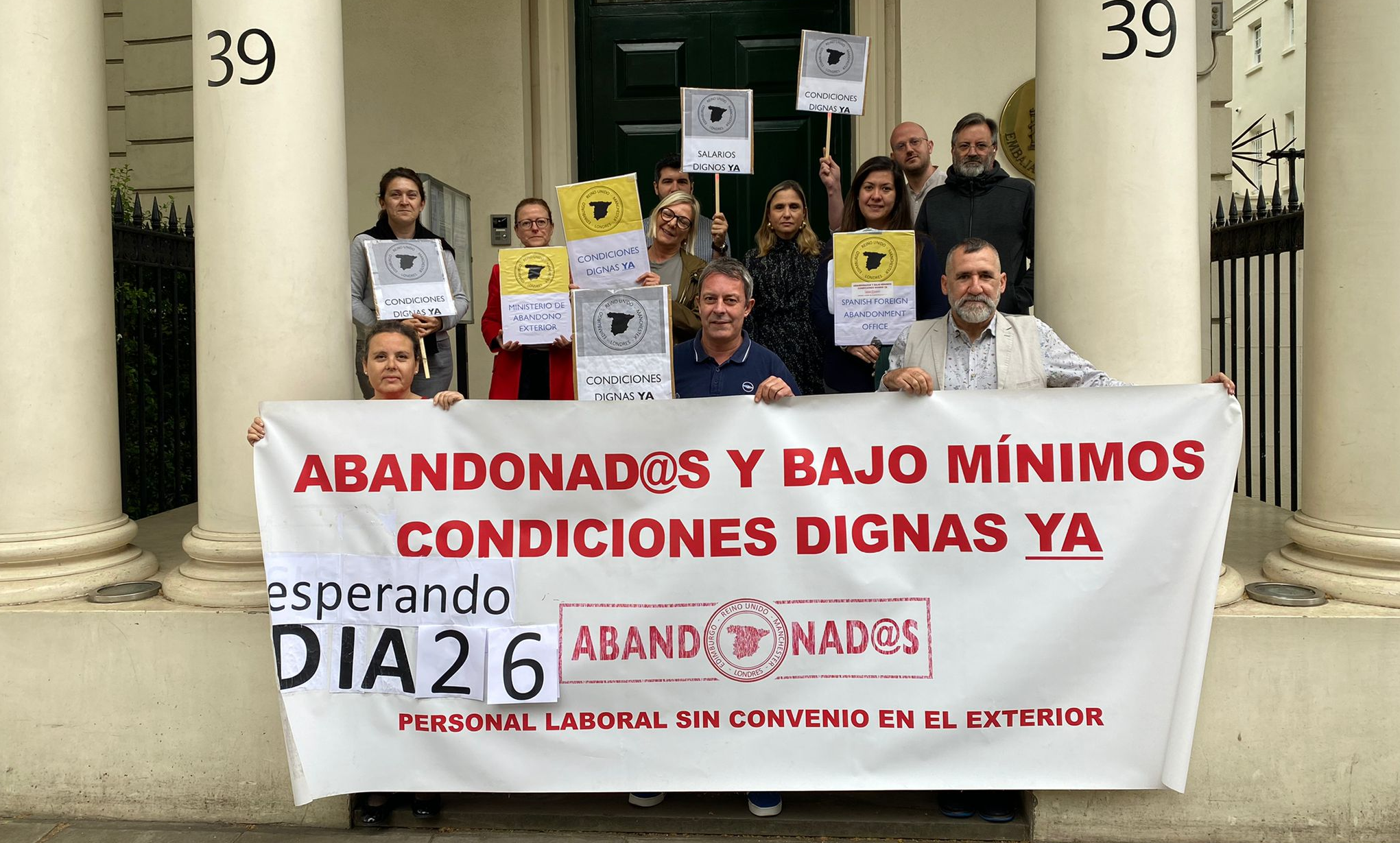 The workforce abroad (PLEX) is on a war footing. There are some 5,000 employees of embassies, consular services and organizations such as the Cervantes Institute, who in recent years have seen how their purchasing power has been reduced, without upward revisions to their salaries despite inflation. This situation especially affects those who live in countries with prices higher than those of Spain, such as Belgium or Israel. In the United Kingdom they even went on strike and protests are taking place in several countries. In this climate of labor conflict, the Superior Court of Justice of Madrid has given workers good news. It has ratified the ruling of the Social Court No. 8, which on July 29, 2020 declared in the first instance the violation of the fundamental right to collective bargaining of the PLEX, since the annual review of their salaries had not been carried out.

The origin of the dispute dates back to 2009. Until then, the salary of foreign labor personnel was subject to an annual salary review. These updates were implemented based on a 1990 agreement. It was “an instrument that requires annual negotiation of remuneration by country and geographical area, taking as a reference base the evolution of consumer prices and the variation of the exchange rate in the local currency with respect to the currency of the situation”, explains the Workers’ Commissions in a statement. In 2018, the union filed a collective dispute lawsuit for the “violation” of the negotiation. In 2020, the Social Court number 8 of Madrid agreed with the union, but Foreign Affairs and the rest of the ministries questioned appealed the ruling. The TSJM has just ratified it, but there is still room for an appeal. This newspaper has contacted Foreign Affairs to find out if it will appeal, but has not received a response so far.

The first sentence was very clear: “I must declare and declare that the right to collective bargaining of the PLEX at the service of the General State Administration has been violated by not proceeding to negotiate the annual review of their salaries or, in any case, to the negotiation of the rationalization by countries and areas of said remuneration”.

The British delegation started the protests, which have spread to embassies around the world. In the United Kingdom they went on strike in mid-March and called it off 50 days later, when the Foreign Secretary promised a solution “in weeks”. “I take it very seriously,” said José Manuel Albares on May 9, while acknowledging that the working conditions of these workers “are not good.” Union sources indicate that the wage increase in the United Kingdom (which is not yet in force) will be 8%, “insufficient” according to union representatives. The workers calculate that in the years without revisions their salary has been devalued by 30%. The next countries in which there will be salary increases for the PLEX will be Australia, Canada, Denmark, the United States, Finland, Norway and Sweden.

In other countries, such as Israel, workers demonstrate daily in front of Spanish buildings in Tel Aviv. Protests also take place in Brussels, which hosts the largest Spanish delegation, with some 300 workers. Of them, 100 are PLEX, whose indignation in these years is multiplied by the fact that the 2,500 civil servants abroad have indeed enjoyed salary reviews, like the rest of public workers on Spanish soil. Labor personnel are also mobilizing in France, Germany or the Netherlands.

Next Monday begins a protest campaign promoted by CSIF, CC OO and UGT to which workers from the 150 countries in which Spain has diplomatic delegations are summoned. “We ask PLEX around the world to protest in front of their buildings every Monday during lunch break. We are going to repeat this action every Monday from now on”, explains Osmany Llanes-Melo, head of CC OO in the Foreign Service. “It’s not just about salaries. There is a chronic neglect of foreign labor personnel”, adds Sebastián Trenado, head of UGT Public Services Abroad. The slogan of the protest is “Black Mondays in the foreign service”.

The unions ask the Government to return to the agreement that protected the annual review of wages. “You don’t have to invent anything, it’s not that difficult. It is, simply, to apply what is done throughout the Administration to the workforce abroad, the only one whose salary is not reviewed. It is not a huge task”, adds Trenado. In a statement, CSIF warns that “the entire social part will proceed immediately to file a complaint with the Labor Inspectorate for the obstruction of the operation of the PLEX committee and the blocking of collective bargaining, without prejudice to the possible filing of other legal actions that may correspond. Llanes-Melo also warns the Executive: “If they don’t sit down to negotiate, at the turn of the summer we will start a strike campaign. They leave us no choice.”

Emre Belözoğlu praises Fenerbahçe: They have a strong game

Truck collided with passenger bus: There are dead and injured

Shinzo Abe’s killer alleges he was moved by former prime minister’s support for a church that bankrupted his mother | International
July 15, 2022

The investigation into the Trump papers gets entangled in the courts | International
September 18, 2022

War in Ukraine: The EU “urgently” prepares more sanctions for the Russian “atrocities” in Bucha | International

Iranian women win a battle against the regime: “There are more and more women without veils. We are no longer afraid” | International
2 weeks ago

Iranian women win a battle against the regime: “There are more and more women without veils. We are no longer afraid” | International

China and the United States, condemned to understand each other and compete | International
4 days ago

China and the United States, condemned to understand each other and compete | International