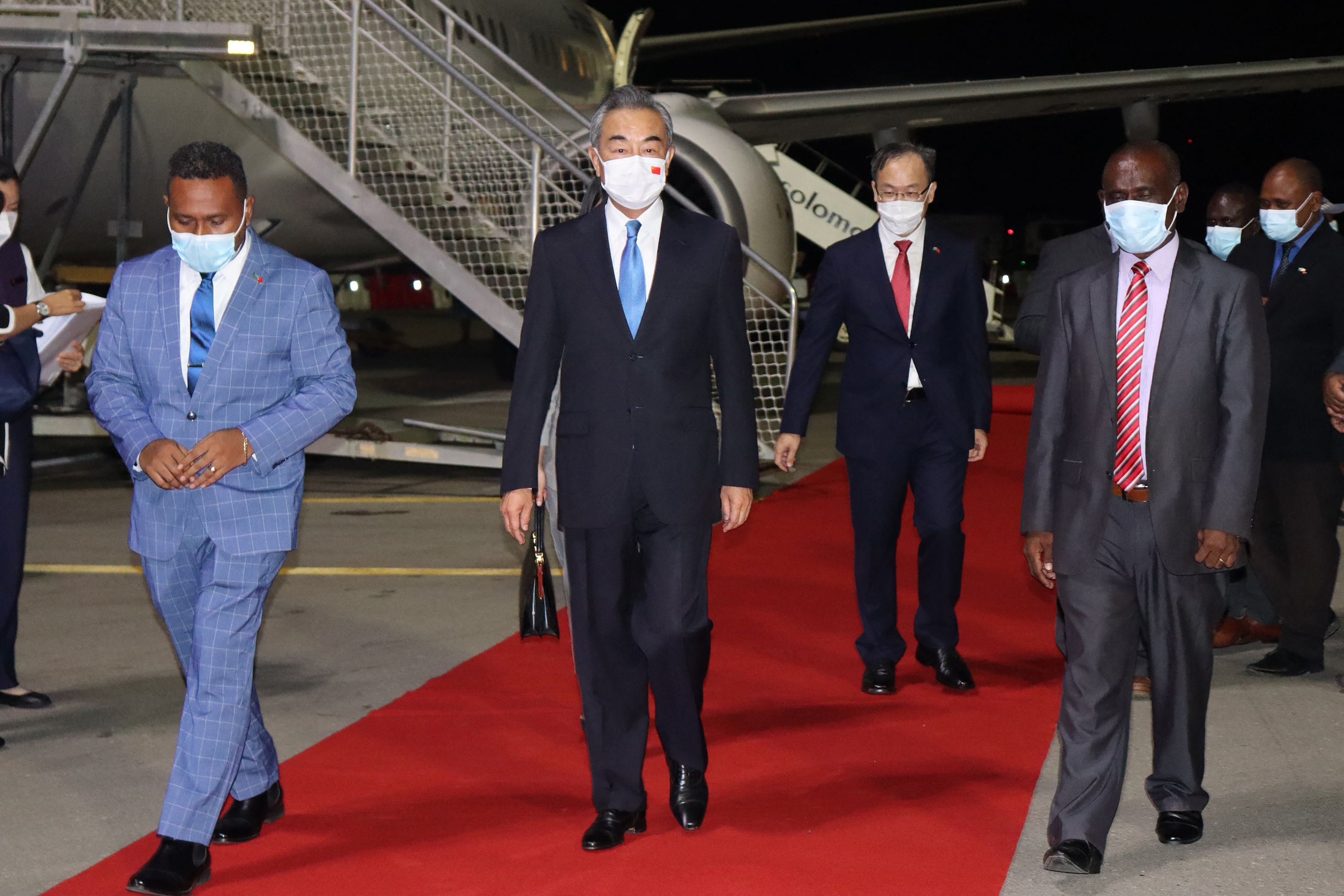 Fiji. Kiribati. The Solomons. Tonga. Names that evoke tiny tropical paradises, shirtless Olympic flag bearers or bloody World War II battles. But also islands in a key strategic position to give access to the South Pacific (or block vital sea routes), a short distance from Australia, for decades the great regional protector. These territories are now the scene of an intense duel for control between the great powers: on the one hand, Australia and the United States. On the other, a China that disembarks at full speed by sending high-ranking government officials and promising investments, security agreements and infrastructure construction.

Alarm began to spread in Canberra and in the United States following the surprise signing last month of a Cooperation pact between China and the small Solomon Islands, of 687,000 inhabitants. The agreement covered issues of trade, fishing and – above all – security, by allowing Chinese security forces to be sent to maintain social order, protect lives and private property at the request of the national government. Chinese military ships will be able to carry out visits and carry out “logistical spare parts”. Although the two signatory governments deny it, both Canberra and Washington fear that the pact could open the way for a future Chinese military base in the area, less than 2,000 kilometers from Australian territory.

China’s growing diplomatic and economic activity in the area has not stopped there. This Thursday, the Chinese Foreign Minister, Wang Yi, began in Honiara, the capital of the Solomons, a 10-day tour of eight Pacific island nations: the Solomons, Fiji, Kiribati, Samoa, Tonga, Vanuatu, Papua New Guinea. and East Timor. Upon his arrival, according to a statement from Foreign Affairs in Beijing, he has expressed his hope that relations with Honiara will serve as an example for other Pacific islands.

A “sincere” partner, according to Beijing

Beijing describes itself to these nations as a “sincere and reliable” partner, appealing to the disenchantment that some of these governments may feel for the cavalier treatment or even neglect that they consider they have received for decades from Australia, the great regional power, and the United States.

On this tour, in which Wang will meet with Pacific foreign ministers in Fiji next week, the Chinese minister will offer a cooperation plan, the China-Pacific Island Nations Joint Development Visionsent last week to a dozen governments and whose existence was anticipated by Reuters.

With this initiative, similar in language to the pact signed with the Solomons, China hopes to strengthen its ties with the region, offering millions of euros in assistance, and the prospect of a free trade agreement that gives products from these islands access to the huge Chinese market. Beijing also offers to train local police and cybersecurity cooperation. In exchange, he seeks access to the area’s natural resources and the ability to draw highly detailed marine maps of those waters.

The intense Chinese courtship of the islands hitherto firmly anchored in Australia’s orbit has unleashed fear in that country and in the United States of a change in the geopolitical alignment of those nations, which, in addition to their strategic position, contribute votes that can be decisive in international institutions. “We know that China sees [su propuesta de Visión de Desarrollo] like the first of many,” said the new Australian Prime Minister, Anthony Albanese. “It is trying to expand its influence in the region of the world where Australia has been the number one security partner since World War II,” he added.

After taking office on Monday, Albanese promised to multiply his attention to those island nations. Starting with assistance against climate change, the great concern of those States in the forefront of the effects of greenhouse gases and that his predecessor, the conservative Scott Morrison, disdained during his mandate. Canberra has also announced a plan for 500 million Australian dollars (330 million euros) in development aid. One of his first acts as head of government has been to send his foreign minister, Jenny Wong, to Fiji to meet with that country’s prime minister, Frank Bainimarama, before the arrival of the Chinese representative.

The United States has not been left behind. In February, Washington announced the reopening of a US embassy in the Solomons after an absence of 29 years. In April, the White House chief for Indo-Pacific, Kurt Campbell, was traveling to the area.

The race has picked up even greater speed this month. In addition to Labor’s victory in the Australian elections, US President Joe Biden’s tour of Asia has contributed. At the Tokyo summit on Tuesday of the Quad, the informal alliance between the US, Australia, Japan and India, the four leaders devoted part of their discussions to China’s growing influence in the South Pacific. They announced the creation of an initiative, Alliance for the Knowledge of the Maritime Domain in the Indo-Pacific, which will include the islands of the area and will respond to humanitarian disasters, in addition to combating illegal fishing.

This week, and while the intense Chinese and Australian diplomatic campaigns are carried out, Campbell was speaking by video conference with Bainimarama about economic agreements and for an improvement in security. For its part, Beijing is preparing, according to him Financial Times, a new bilateral agreement with Kiribati, although this country has denied it. Minister Wang will visit Tarawa, his capital, for four hours this Friday.

The countries in this area had traditionally been diplomatic allies of Taiwan —and therefore had no formal ties with Beijing— until, after the victory of President Tsai Ing Wen in 2016, the Xi Jinping government began to courting Taipei’s partners to break ties with the self-ruled island and engage with China.

Between allegations of corruption and bribery, the Solomons took that step in 2019, just four months after Manaseh Sogavare came to power.

The relationship with the islands has become an even more important element for Beijing in its strategic rivalry with the United States and its allies after Washington announced in September the formation of Aukus, the military alliance for the Pacific that it forms together with Australia and the UK to respond to the rise of China.

“The United States tries to tame the rise of China with its Indo-Pacific strategy, but now China’s footprints are ubiquitous in the region, and that shows that the taming strategy is not working,” the newspaper published this Thursday. Global Timesowned by the Communist Party.

Meanwhile, the islands let themselves be loved. In a tweet, Bainimarama wrote this Thursday: “They ask me about the Fiji agenda. At all tables, what matters most is our people and our planet, as well as our respect for International Law.”

Élisabeth Borne: The French Prime Minister throws herself into the electoral mud of the legislative elections | International
June 11, 2022

Élisabeth Borne: The French Prime Minister throws herself into the electoral mud of the legislative elections | International

What is to come was rehearsed in Syria | International
March 11, 2022

What is to come was rehearsed in Syria | International

Geopolitics of the attack on Salman Rushdie | International
August 24, 2022

Geopolitics of the attack on Salman Rushdie | International

The shooting that does not stop in the United States: one and a half every day | International
June 2, 2022

The shooting that does not stop in the United States: one and a half every day | International

Citizens mourn Isabel II: “Thinking that she will no longer be there leaves you breathless” | International
September 8, 2022

Citizens mourn Isabel II: “Thinking that she will no longer be there leaves you breathless” | International

Diego Molano: The Colombian Minister of Defense overcomes the motion of censure for the Putumayo massacre | America Colombia
May 5, 2022

Diego Molano: The Colombian Minister of Defense overcomes the motion of censure for the Putumayo massacre | America Colombia