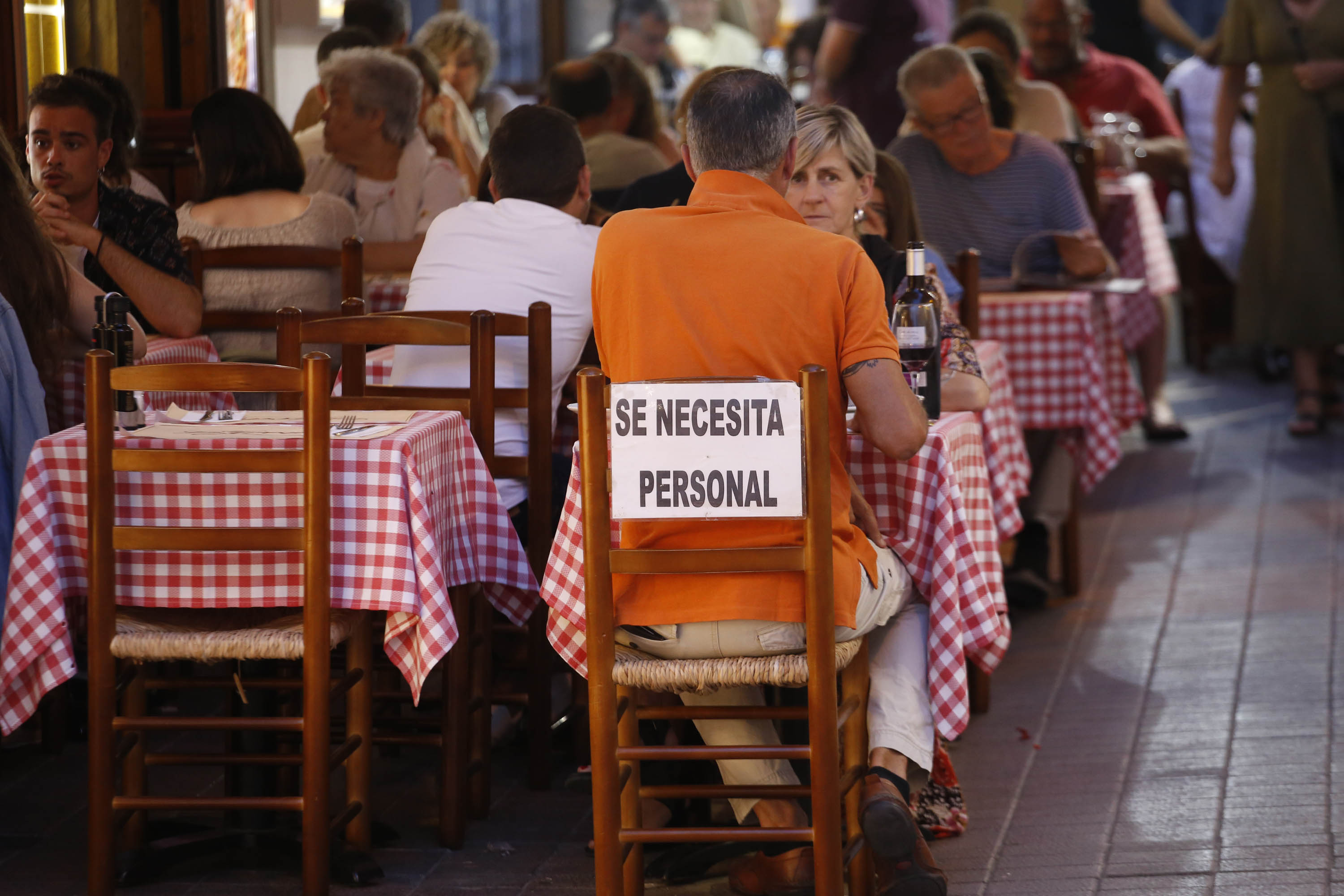 In Europe there is a lack of labor, and in Spain too, although not as much. According to the latest official data, there are 109,056 vacancies that the labor market is currently unable to cover. A gap that barely represents 0.7% with respect to the more than 20 million employed people who have been registered for the first time in the first four months of the year, well below the 2.6% European average or 3, 9% from Germany. However, it is an anomalous phenomenon for a country with more than three million unemployed, and which has the highest unemployment rate in the euro zone (13.65%).

From the business environment they have been warning in recent weeks of the need to address this mismatch between supply and demand, insofar as it can put the imminent summer campaign at risk, especially in the hospitality sector, where there is a shortage of personnel. In the medium term there is also concern in construction, another of the traditional engines of the Spanish economy, where employers’ projections point to an uncovered demand of 700,000 jobs in the coming years. How to remedy it? “pay them more (Pay them more),” the president of the United States, Joe Biden, suggested to businessmen in his country as a shock treatment against grand resignation that starred millions of workers frustrated with their jobs at the end of the year.

Those words, together with that same pressure strategy, but without a phenomenon of resignation similar to that of the United States having taken place in Spain ―there the unemployment rate is 3.6%, which facilitates turnover―, they have been repeated by various forums the Vice President and Minister of Labor, Yolanda Díaz, and the Secretary of State for Employment, Joaquín Pérez Rey, to the displeasure of the main business organizations, CEOE and Cepyme. For these, it is a “simplistic” and “demagogic” solution.

From their position, they defend that the remedy for these labor gaps is to bet on training workers in accordance with the skills that the companies themselves demand, and not on improving remuneration, especially after having placed the minimum wage in the 1,000 euros per month. Two recipes that, in the opinion of the experts consulted for this report, are as valid as they are complementary.

“This panorama in which we find ourselves is not new, but has existed for quite some time in our labor market, and, therefore, there is no recent circumstance that has caused it”, contextualizes Jesús Cruz, professor of Labor Law and Social Security at the University of Seville. According to the records of the National Institute of Statistics (INE), the number of vacancies has experienced constant growth between 2016 and 2019, when it went from an average of 60,000 to more than 100,000. With the exception of 2020, a year in which the pandemic destroyed 623,000 jobs, in 2021 it has continued to grow, adding 10,000 new jobs. However, the progressive rise in the number of Social Security affiliates during this time (by more than four million) means that this proportion remains residual.

“The positions that are not being filled are those that require temporary occupation and where what exists is a mobility problem, since they are located in tourist areas where the price of housing has skyrocketed. To that extent, the problem is not so much remuneration per se, but rather it derives from the fact that with this remuneration it is not possible to face the costs associated with work”, Cruz details. In his opinion, the hospitality industry or construction are, moreover, sectors closely linked to foreign labor, and where there have traditionally been no problems finding workers, “because if not, migratory flows would have been affected, and been so”.

The recovery of the economy after the blow of the pandemic seems like another factor of change in the labor market. “We are in an expansive cycle in which employment is being created. And given this new panorama, those jobs with worse working conditions are being discarded because there are better alternatives”, complements Adrián Todolí, professor of Labor and Social Security Law at the University of Valencia. “At the same time, there are also those who have decided to stay out of the market because the salary conditions it offers do not allow them to evolve,” he adds.

Mixing endless working hours that make it difficult to reconcile with low wages is a combination that has led to the rejection of job offers such as those traditionally offered by the hotel industry. A sector that, according to data from Infojobs, published more than 17,000 offers in the month of April, six times more than in the same month last year (2,541). Most of them were looking for waiters (4,886), three times more than those that were offered at the beginning of the year (1,571), becoming one of the ten most demanded positions within the general catalog. “For eight out of ten applicants, salary is essential to apply for a job. And in sectors such as the hotel industry, an average of 18,500 euros gross per year is offered, when the average salary offered in 2021 was 24,555 euros, ”explains Mónica Pérez, Director of Communication of the job search platform.

But the most intense light of the alarm that employers have lit points to the short and medium-term demand for technical profiles, particularly those with specific skills within the digital ecosystem (cybersecurity, data analysis, information management in the cloud) . “In the last decade, the demand for computer science and engineering profiles has doubled, but in the same period the number of recent university graduates in these subjects has been reduced by more than 26%”, analyzes Valentín Bote, director of Randstad Research . “Many companies have recently had to undertake their digital transformation processes, a trend that has been accelerated by the outbreak of the pandemic. These are very cutting-edge technologies that require very specific training, which is why continuous training is so important”, he adds.

In this sense, the Government has approved this month the distribution of 1,239 million euros for vocational training in 2022 ―the highest annual figure invested so far in this area―, with which it seeks to improve the training of workers, both those who already have a job, as well as those who are unemployed. This is a delivery of funds to the regional governments so that they continue to develop the Vocational Training Modernization Plan that began in 2020 with the aim of equating it to that offered by other countries such as Germany.

“The problem is that in Spain companies are used to directly receiving a fully trained profile, while in countries like the United States, Germany, Japan or the Nordic countries, it is the company itself that assumes its training. For this reason, since they are the ones who put up the money, they can then decide which modules they have to study”, says Todolí. “One of the things that has not yet taken off in our labor market is training contracts despite the 2021 reform. This is indeed an important lack that we have,” adds Cruz. In April, 1,450,093 contracts were registered, of which 698,646, 48.2% -practically one in two-, were of an indefinite nature. However, only 6,428 were training, 0.4% of the total.

“The cryptosect has kidnapped our children” | Economy

Turkey and UN agreed, Istanbul will be regional center

SCT REDUCTION LAST SITUATION: Will there be a 2022 SCT discount, when will it come? Will vehicle prices decrease with the SCT reduction?

Esplanade of the Jerusalem Mosques: At least three dead in a new attack in Israel | International
May 5, 2022

Esplanade of the Jerusalem Mosques: At least three dead in a new attack in Israel | International

The US will once again grant Cuba 20,000 annual emigrant visas and will reactivate its consulate in Havana | International
3 weeks ago

The Conservative Party toughens the rules of the primaries to speed up the replacement of Boris Johnson | International
July 11, 2022

The start of Donald Trump’s election campaign, in pictures
September 4, 2022

The start of Donald Trump’s election campaign, in pictures

Legislative elections: the United States wages the great battle for the future of its democracy | US Elections
3 weeks ago

Mélenchon and the left arm-wrestle Macron in the street | International
October 16, 2022

Borrell defends the constituent process: “If it includes different political expressions, Chile has nothing to fear” | International
May 1, 2022

Borrell defends the constituent process: “If it includes different political expressions, Chile has nothing to fear” | International

Last minute of the war today, live | Zelensky: “Before we talked about peace, now we talk about victory”
August 24, 2022

Last minute of the war today, live | Zelensky: “Before we talked about peace, now we talk about victory”