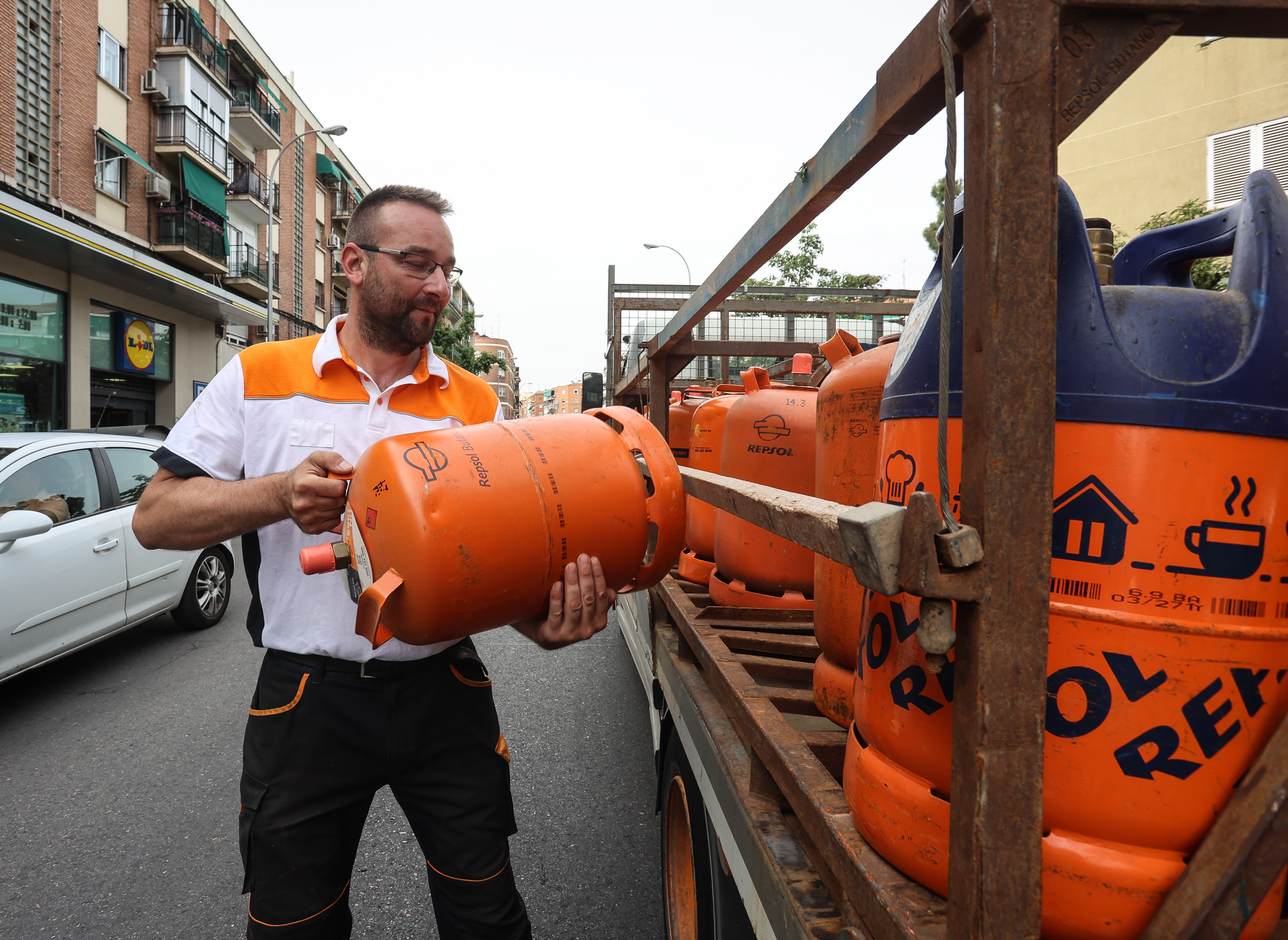 For three decades, every two months, the butanero’s visit to Gloria Carrasco’s home is a fixed appointment. She lives with her parents in a 50-year-old block of flats located in a poor neighborhood in Huelva. “The structure is old and it is not feasible to install a renewable energy system,” she says on the other end of the phone. Her entire family contributes to the usual household expenses, so the rise in prices of the butane cylinder has not gone unnoticed. “Years ago I saw my parents pay the butanero 10 euros for a bottle, plus a tip. Today there are almost 20 and we don’t give him anything else”.

The inflationary bonfire is taking a heavy toll on housing costs. The traditional butane cylinder, weighing 12.5 kilos, is rapidly approaching 20 euros. Its price is reviewed every two months by the General Directorate of Energy Policy and Mines, dependent on the Ministry for the Ecological Transition and the Demographic Challenge, taking into consideration —above all— the price of the raw material in international markets. In May, according to a resolution published last Tuesday in the State official newsletter, its price has been 19.55 euros, a new historical maximum. The rise represents an increase of almost 5% compared to the previous review (in March) and 34% compared to a year ago. It is the tenth consecutive rise since September 2020, when the uptrend began.

The rise is not unexpected. The strong increase is mainly due to the rise in crude oil prices (+6% in the period), largely due to the Russian invasion of Ukraine, although not only: the escalation of oil —and, therefore, of butane— had started well before . Added to this is the increase in the cost of freight (which has risen almost 10%) and the depreciation of the euro against the dollar. The updates to the price of the bottle cannot vary by more than 5%: the additional increases are accumulated to be applied in subsequent reviews, as the National Commission for Markets and Competition (CNMC) reminds us. If this limit did not exist, the price without taxes of the bottle would have increased by 8%. Natural gas, butane’s main competitor, has not been immune to the general increase in prices suffered by the energy market. Compared to exactly a year ago, this Monday it cost 211% more.

The largest marketer of butane in Spain is the oil company Repsol, which has around 200 distribution agencies deployed throughout the country. More than 2,000 butaneros work there, delivering the cylinders to the users’ homes. In addition, any consumer can buy them at service stations and take them home on their own, as long as they have a contract. Roberto Rodríguez, in charge of the Repsol distribution agency in Medina de Pomar (Burgos), is aware that the rise in gas prices has created deep discomfort among his clients. “Everyone thinks it is an excessive price for a basic necessity good. Many, instead of taking two bottles, buy just one and wait to see if they become cheaper in two months”, he points out.

Despite the concern, some workers in the sector say that butane sales have not decreased. Raquel García, in charge of a point of sale in Montijo (Badajoz), assures that due to the rise in the price of electricity, several clients have changed electrical appliances for gas-powered ones. “Although it seems like a setback, it’s cheaper and so they don’t have to pay attention to time slots to spend less,” she says. According to Juan Antonio Sánchez Calero, butanero for more than 20 years, although the rate of purchase has not slowed down, most users no longer usually keep any bottle at home: “They go for another just when they are about to finish the one they have It is a way of distributing expenses month by month.

In their daily orders, the butaneros are witness to the economic difficulties that some of their clients go through. Antonio Sánchez Claudio started handing out bottles of this gas at the age of 13, when he was leaving school. “It is sad to see how some mothers look for every last coin when it comes to paying. Sometimes I have returned home with tears in my eyes. They have even told me to my face: ‘Antonio, can you leave me a bottle of butane to bathe the children that I haven’t done for three days? I’ll pay you later, ”he assures.

Turning off the tap is the most common strategy to reduce expenses. Carrasco, for example, turns on the thermos less during housework. “These are small details that contribute to lengthening the life of the cylinder,” he warns. Sara Camacho, who shares an apartment with her partner in the Madrid neighborhood of Hortaleza, also tries to reduce hot water consumption as much as possible: “I take shorter and warmer showers, and when it comes to washing the kitchen pots and pans I manage with cold water. Instead of three cylinders a month, I now consume two to try to cushion the price increase”, she admits.

The Organization of Consumers and Users (OCU) foresees that in the next revision, which will take place in the middle of July, the limit of 20 euros will be reached. “A slight increase would be enough to place the price of the butane cylinder above that threshold. It is a hard swallow for the thousands of users of this fuel, who often cannot access other alternatives”, say sources from the association. Sánchez Claudio emphasizes that now the stoves and heaters do not work as much, but when the next winter arrives, many families will not be able to afford to change the butane cylinder. “At the moment, two bottles cost 40 euros, which is equivalent to a whole day’s work. It is an abuse ”, ditch.

The remarkable death in the botox disaster in Beylikdüzü!

By admin
Recent Posts
Latest News
Facebook Twitter WhatsApp Telegram
Back to top button
Close
Featured Posts
Going against the tide, some Ukrainians return to their homes under Russian rule | International
May 2, 2022

Germany activates the second phase of its emergency plan in the face of gas shortages after supply cuts from Russia | International
June 23, 2022

Putin orders to avoid a frontal assault against the last Ukrainian stronghold in Mariupol | International
April 21, 2022

Video analysis | The keys that explain the first round of the elections in Colombia | Presidential Elections Colombia
May 30, 2022

Chelsea Manning: “Someone much worse than Trump can come” | International
June 13, 2022

Chelsea Manning: “Someone much worse than Trump can come” | International

Jordán Rodas: “The big businessmen think they are the owners of the farm, they have done a lot of damage to Guatemala” | International
August 5, 2022

Jordán Rodas: “The big businessmen think they are the owners of the farm, they have done a lot of damage to Guatemala” | International

The EU condemns the attacks on civilian infrastructure in Ukraine: “They are war crimes” | International
October 10, 2022

The EU condemns the attacks on civilian infrastructure in Ukraine: “They are war crimes” | International