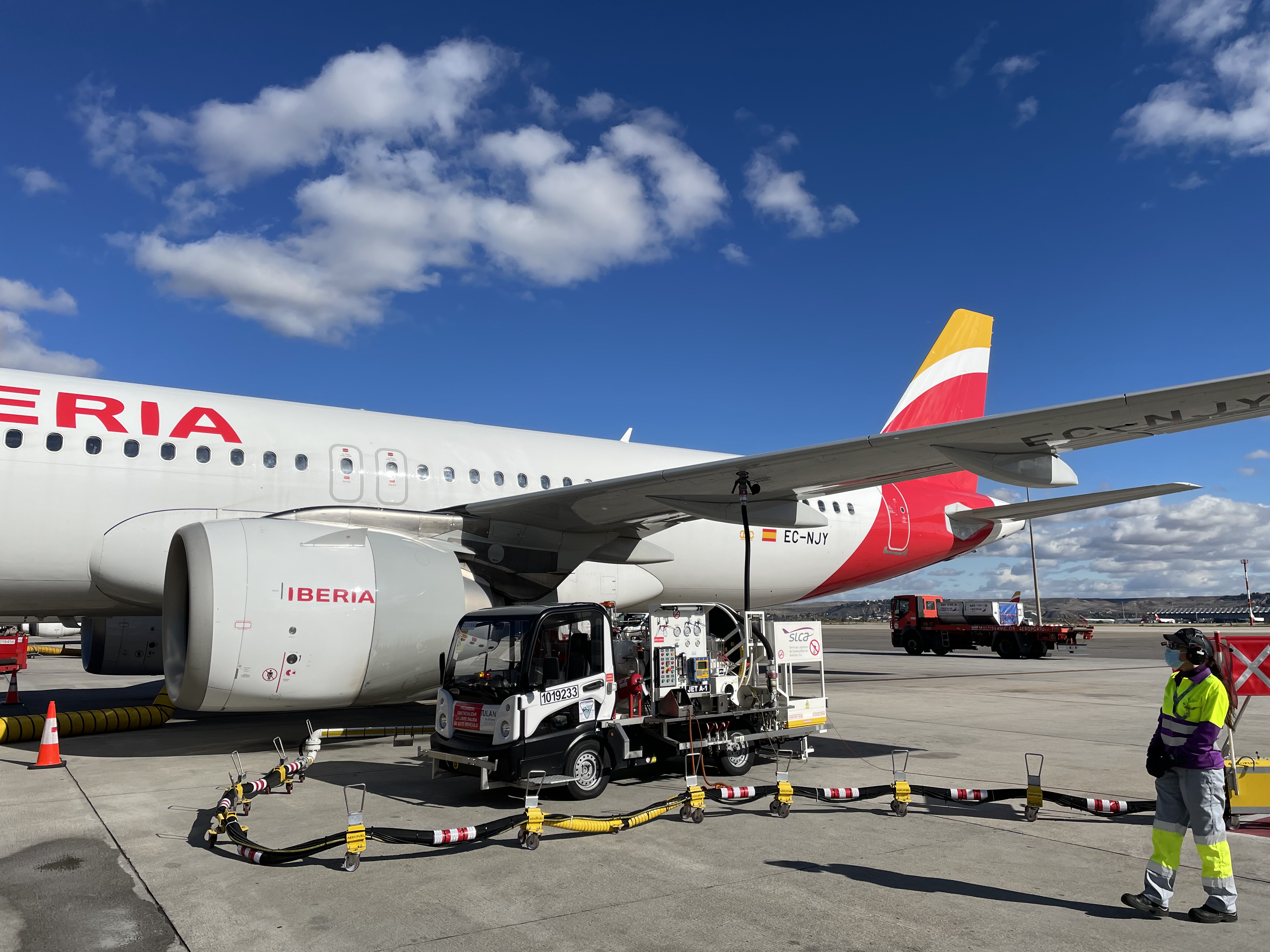 Iberia will use a biofuel produced from waste at Repsol’s Petronor refinery in Bilbao on its inaugural flight between Madrid and Washington. The flight is operated with an Airbus A330-200, with capacity for 288 passengers, one of the airline’s most efficient aircraft. The IAG company will use the same biofuel on two other flights, the inaugural one to Dallas and the first flight to San Francisco that it recovers after the pandemic. These first long-haul flights with a low carbon footprint represent a new advance in the ecological transition of the aviation sector thanks to the use of biofuels and the improvement in energy efficiency. The use of biofuels in these three flights will allow a reduction of emissions into the atmosphere of 125 tons of CO2, according to the airline.

This initiative arises from the collaboration agreement signed last July between Iberia and Repsol towards more sustainable mobility. Throughout this year, both companies have collaborated on the Aviator project, to analyze the impact of aviation emissions on airport air quality. Within this framework, they have operated the first Madrid-Bilbao flight with sustainable fuel from waste, and Iberia has joined the SHYNE (Spanish Hydrogen Network) consortium, led by Repsol, to accelerate the development of green hydrogen in Spain.

In the next two years, Repsol and Iberia will also collaborate in the operation of flights with a percentage of biofuel that can reach up to 50% produced in the Cartagena plant, in the use, also in flights, of synthetic fuel produced in the plant of Petronor in Bilbao and, for airport service vehicles, the use of HVO (hydrotreated vegetable oil).

Repsol and Iberia have taken a further step in their alliance to reduce emissions in the aeronautical sector with the operation of the first long-haul flights with biofuel produced in Spain from waste not suitable for human consumption. Specifically, the biojet used belongs to a batch produced in 2021 at the Repsol Group refinery, Petronor, located in Bilbao.

The first flight that has incorporated biofuel has inaugurated the Madrid-Washington route with a twin-engine Airbus A330-200 aircraft, with capacity for 288 passengers and currently one of the airline’s most efficient aircraft. This A330-200 version has a maximum take-off capacity of 242 tons, and consumes 15% less fuel than the fleet it replaces and is therefore more environmentally friendly. The second will be flight IB6193 from Madrid to San Francisco, a route that Iberia recovers this Wednesday after the pandemic, and the third will be Iberia’s inaugural flight from Madrid to Dallas that will take off this afternoon, both also operated with the Airbus fleet. A330-200.

With these three flights, Iberia and Repsol have reduced CO2 emissions into the atmosphere by 125 tons, thanks to the improvement in the consumption efficiency of the fleet used, together with the use of sustainable biofuel.

For Josu Jon Imaz, CEO of Repsol, “a sector like the aeronautics sector needs solutions like biofuels for a decarbonization process like the one we are in. The commitment of Repsol and Iberia places us at the forefront in this regard. In addition, it consolidates our position as a multi-energy company with the goal of achieving zero net emissions by 2050, being the first company in the sector to adopt this ambitious goal”.

For his part, the president of Iberia, Javier Sánchez-Prieto, commented that “aviation faces a very challenging challenge that can only be achieved by taking steps like today’s, which promote the production of fuels of sustainable origin in sufficient quantity and with competitive prices, so that this allows us to advance in the ecological transition of the aviation sector”.

This initiative is part of the collaboration agreement towards more sustainable mobility signed by Repsol and Iberia last July and is in line with the Sustainable Development Goals (SDGs) promoted by the United Nations through the 2030 Agenda. During this time , both companies have collaborated on the Aviator project to analyze the impact of aviation emissions on air quality at airports.

In addition, the strategic agreement between Repsol and Iberia includes a roadmap for the promotion of sustainable aviation fuels (SAF) for the coming years. On the flights operated this Wednesday, Iberia and Repsol anticipate the measures that the European Union, through the Fit For 55 package, will set by 2025 the obligation of 2% sustainable aviation fuel. Flights to Washington, Dallas and San Francisco already incorporate a 2% SAF.

In the future, Iberia and Repsol will operate new flights with a growing percentage of biofuel mix that can reach up to 50%. This product will be produced in the first advanced biofuels plant in Spain, which is scheduled to come into operation in 2023 in Cartagena. Also in 2024, Repsol and Iberia have planned to operate with synthetic SAF (e-fuel) produced at the Petronor plant in Bilbao. In addition, both companies are working on a project for the use of HVO (Hydrotreated Vegetable Oil) in vehicles for airport services.

Which districts in Istanbul have water shortages? With İSKİ failure, 14 October 2022 When will the İSKİ water outage end, at what time will the waters come?

Union demonstration: Thousands of people demonstrate throughout Spain to demand that the Government act against the rise in prices | Economy

The final countdown to the end of central heating | Economy

The Spanish economy slows down with a growth of 0.2% in the third quarter | Economy

José Manuel Albares, Minister of Foreign Affairs: “The greatest threats to the security of Spaniards now come from the East” | International

Argentina: Visit the former clandestine centers of the Argentine dictatorship from home | International

Orbán emerges unscathed from his links with Putin in the Hungarian election campaign | International
March 30, 2022

Argentina recovers the heroes and removes the animals from its banknotes
May 24, 2022

Argentina recovers the heroes and removes the animals from its banknotes

War in Ukraine: The drive for US hegemony | Opinion

The Government of Sri Lanka imposes a state of emergency on the island after the flight of the president | International
July 13, 2022

Video analysis | Could Le Pen win the elections in France? Surveys give you a choice in ten | Videos
April 22, 2022

Video analysis | Could Le Pen win the elections in France? Surveys give you a choice in ten | Videos