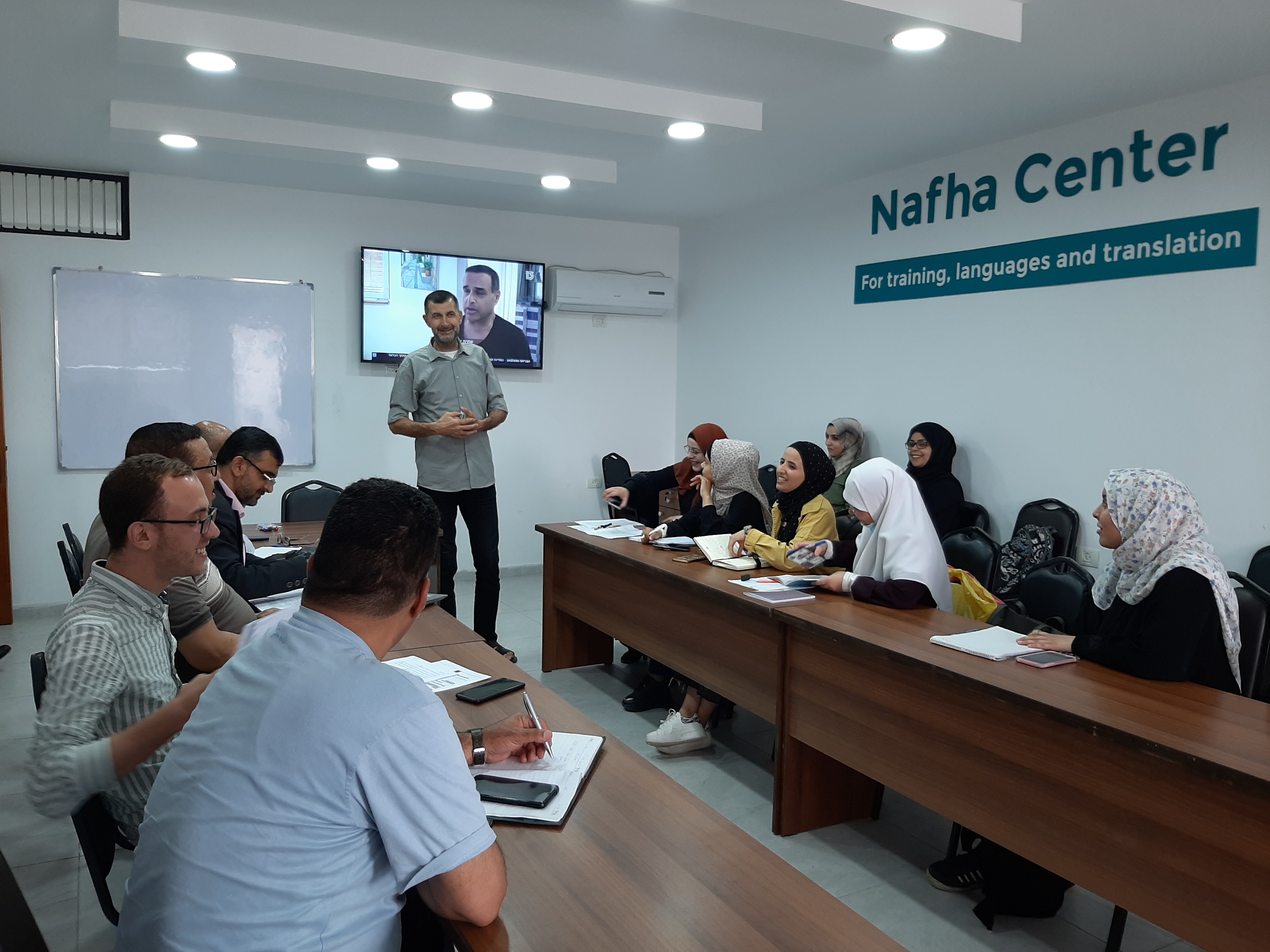 Workers and professionals from the Gaza Strip return to sit in a classroom like adults to learn Hebrew, the language of the enemy that has blocked the Palestinian enclave for 15 years and with whom they have waged four wars since then, the last one just over one year. “They come to study out of necessity, to work in Israel, not to go on vacation abroad,” acknowledges Iman Ben Said, professor and coordinator of studies at the Nafah language academy, located near the university campus of the Gazan capital. Ben Said, a 32-year-old graduate in Philology, explains that the demand for teaching Hebrew has multiplied since last fall, when the Israeli authorities increased the number of entry permits for workers from the strip (12,000 currently and 20,000 announced coming soon).

“Some students are technicians and construction workers looking for a job, but there are also doctors and journalists who need training to send patients to hospitals in East Jerusalem and the West Bank through Israel, which controls that border, or to find out about current events. of the Jewish State”, clarifies the coordinator of the center. After exceeding 160 students at the beginning of the intensive basic level courses in October, four times more than in the previous year, classes are currently taught in two groups of thirty students. “The basic course, which lasts 30 hours on alternate days, costs 150 shequels (42 euros)”, details the teacher. It allows you to understand simple texts in Hebrew, identify posters and signs and, above all, communicate with the Israeli security forces at the Erez border checkpoint, the only way into Israel for Gazans.

“There are many interested parties who ask us about the classes, but they confess that they cannot afford the registration fee,” laments Ben Said, “and that they cannot even afford the means of transport to go to the center.” More than 60% of Gaza’s 2.2 million inhabitants live below the poverty line, most of them dependent on international cooperation to survive, and more than half of its workers are unemployed, while Israel and Egypt impose strict restrictions to leave the Strip.

A job in Israel can multiply by four or five times the average income of an employee in Gaza, which ranges between 200 and 500 euros per month. For this reason, after the ceasefire that put an end to the last conflict in May of last year, Israel offered the Palestinians a truce with “economic peace” without political compensation, such as negotiating a state of their own. “This Israeli offer of 20,000 or 30,000 jobs for Gaza is insignificant,” warns Yusuf Sarhan, Deputy Minister of Public Works and responsible for the reconstruction of homes and businesses destroyed or damaged by Israeli aircraft bombing. “Before the Second Intifada (2000-2005) broke out, more than 130,000 Gazans had work permits in Israel, and since then three-quarters of the companies have become inactive,” says Sarhan, who estimates that more than 3 billion euros the cost of rebuilding the economic infrastructure of the Palestinian territory.

In the advanced level Hebrew class at Nafha Academy, Fatma Ismail, 29, with a degree in English Philology, tries to improve her knowledge of the enemy’s language. “I hope to find a job at a university in Gaza,” she confesses, “but I don’t plan to look for it in Israel.” Professor Samir—who declines to give his last name—meanwhile begins to write words in Hebrew with a marker pen on a whiteboard. Meanwhile, on a television screen, students watch a program on Israeli Channel 13 absorbed. Ibrahim Abu Amir, a 60-year-old journalist from the Palestinian Wafa Agency, is one of those who pay more attention. He assures that he wants to perfect his level of Hebrew in order to be able to closely follow Israel’s politics. “I have the impression that they are going to have elections again,” he quips with a wink.

Until now, prison was one of the main avenues for learning Hebrew for many Palestinians in Gaza. Yahya Sinwar, the political leader of Hamas in the Strip, spent 22 years in Israeli prisons after being convicted of terrorism. The strong man of the Islamist movement, an organization that has de facto governed the coastal enclave since 2007, is considered by the analysts of the Hebrew press as a refined expert in the internal politics of the Jewish State. Sinwar was sentenced to four life sentences for ordering the death of Palestinians suspected of collaborating with the Israeli army. However, he was released in 2011 as part of the 1,047 prisoner exchange operation that allowed the release of Israeli soldier Gilad Shalit, kidnapped in Gaza since 2006. As of 2013, Hamas authorized the teaching of the enemy’s language in universities. and secondary schools.

“We have been teaching Hebrew classes since 2014”, points out the educational coordinator of the Nafah academy. “Now we have had to hire more teachers to meet the demand of workers who want to follow the basic course and obtain an entry permit in Israel, but we consider that a minimum period of six months of classes is necessary to acquire the elementary level,” he explains. Iman Ben Said, whose center also teaches Turkish and German classes, languages ​​that are in high demand when looking for work abroad, as well as English, French or Spanish. “Hebrew is a necessary language for those of us who live under occupation or blockade by the Israeli army,” he maintains.

A year ago, this teacher followed the reports about the war in Gaza through Israeli television channels. “She had both versions of the conflict,” she explains. “I was able to see how the information about the bombing that destroyed the tower where the international media offices were located, such as Al Jazeera, one of which I also followed, was manipulated in Israel,” she recalls. His academy occupies several floors of the building that houses the Mansur bookstore, which was razed to the ground during the 2021 conflict. The former headquarters of the Nafha language training center was also on the upper floors of what was then the largest bookstore in Gaza.

GKA Freestyle: One step closer to parity in kitesurfing | International

By admin
Recent Posts
Latest News
Facebook Twitter WhatsApp Telegram
Back to top button
Close
Featured Posts
The Government and the opposition of Venezuela will return to explore the dialogue in Mexico
November 2, 2022

‘My little baby fiu fiu’, the world phenomenon that made one of the thousand scandals of Peruvian politics go viral | International
July 7, 2022

‘My little baby fiu fiu’, the world phenomenon that made one of the thousand scandals of Peruvian politics go viral | International

Russia bombs Chaplino, whose station was being used by the Ukrainian Army | International
August 28, 2022

Russia bombs Chaplino, whose station was being used by the Ukrainian Army | International