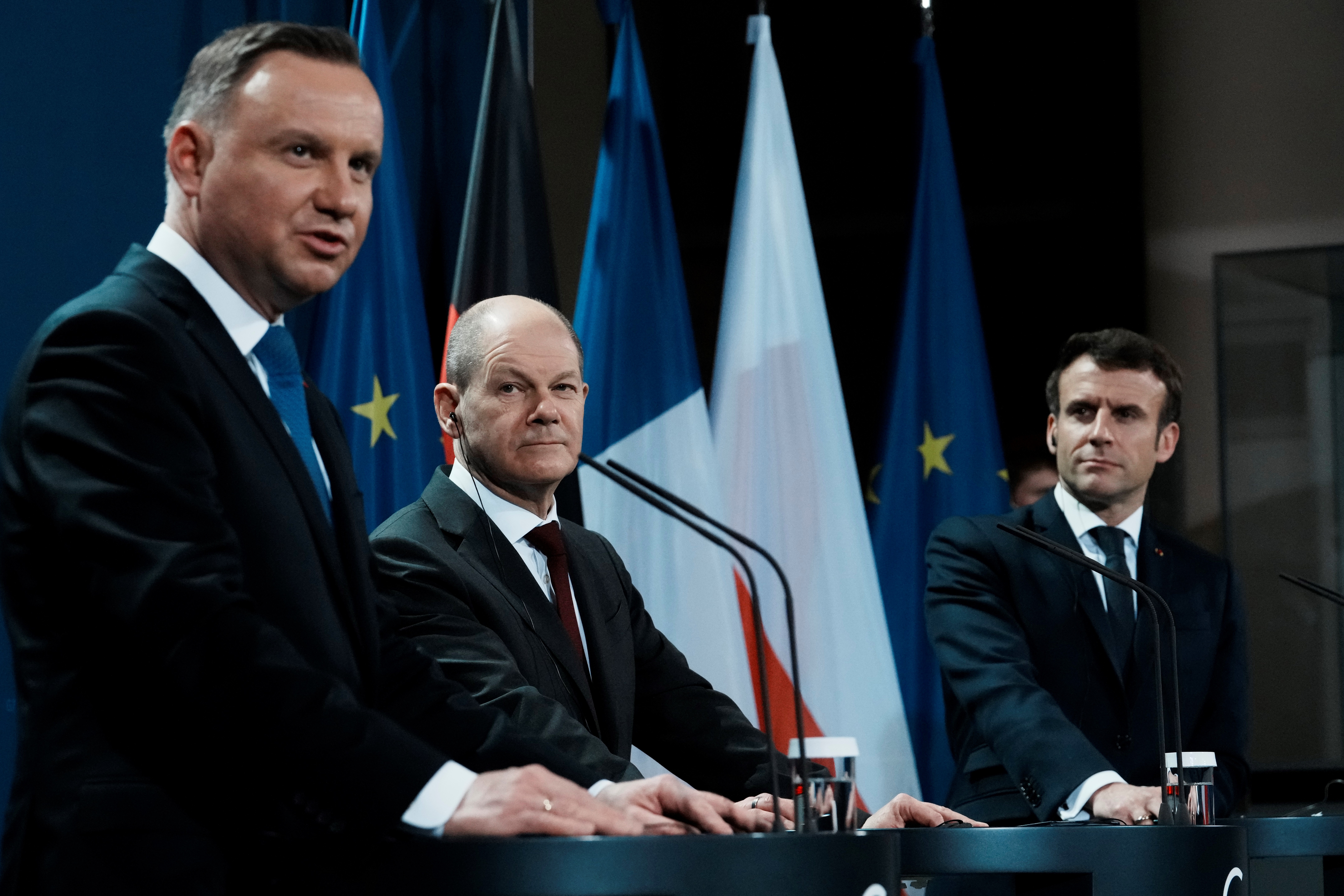 The president of Poland, Andrzej Duda, believes that this is not the time for diplomacy, or at least that it is not the time for the leaders of two Western powers to dialogue with Vladimir Putin because what they achieve is to “legitimize” him, as he has assured in an interview in the German newspaper bild. Duda spares no criticism of her counterparts in Germany and France, Olaf Scholz and Emmanuel Macron, respectively: “I am surprised by all the conversations that are taking place with Putin at the moment. Those talks are useless, ”he assures. This is not the first time that the Polish president has censured the German chancellor, especially for his hesitation in helping Ukraine with heavy weapons. On this occasion he has chosen a reference that can be especially annoying in Berlin: “Did someone speak to Adolf Hitler like that during World War II? Did someone say that Adolf Hitler had to [poder] save face?”.

Duda refers not only to the talks that the two leaders have had with the Russian president, but also to some controversial statements by Emmanuel Macron, in which he stated that it is of vital importance that Russia does not end up being humiliated so that a diplomatic solution can be sought when the war in Ukraine ends. The French president has spoken frequently with Putin since Moscow launched the invasion on February 24. He has also supported Ukraine both with shipments of military supplies and financially, but unlike other European Union leaders, he has not yet traveled to Ukraine to show his support for Volodymyr Zelensky’s government in person. Nor has Scholz traveled to kyiv, despite the fact that the Ukrainian authorities have asked him to do so on several occasions.

Duda’s criticism is directed particularly against the words of Macron, who said that France will try to become a mediating power when the war ends: “Russia must not be humiliated, so that the day the fighting ends we can build a way out through diplomacy”, assured in an interview. The Polish president affirms that he does not understand this deference to “the person responsible for the crimes committed by the Russian army in Ukraine”. “The [Putin] is responsible. He made the decision to send the troops there. The commanders are subordinate to him”, he expands in bild, and returns to the comparison with the greatest genocide in history: “Has anyone ever considered that we should proceed in such a way that it is not humiliating to Adolf Hitler? I have not heard such voices.”

Zelensky last month criticized what he called “suggestions” by some Western countries that Ukraine cede territory and make other concessions to end the war. That idea, publicly defended by former US Secretary of State Henry Kissinger, is reminiscent of attempts to appease Nazi Germany before World War II, the Ukrainian president said in his speech at the Davos forum.

Scholz and Macron made a joint call to the Russian leader on May 28, urging him to release the 2,500 Ukrainian fighters captured at Mariupol’s Azovstal steelworks and to start “serious and direct negotiations” with Zelensky. According to the German Chancellery, both “called for an immediate ceasefire” during an 80-minute conversation in which they discussed “efforts to end” the war. Both Berlin and Paris want to leave the door open to a diplomatic solution, despite the fact that other European partners, such as Warsaw, do not see these approaches favorably. His position has other defenders in the EU. Both Italy and Hungary have urged the European Commission to explicitly call for a ceasefire in Ukraine and to start peace talks with Russia, something that has upset Poland, a hardliner with Moscow.

Crisis over arms swap for Ukraine

Andrzej Duda’s anger at the calls to Putin adds to the criticism of Berlin on account of arms aid to Ukraine. A few days ago the two countries experienced a small crisis due to the exchange system (Ringtausch, circular exchange in German) designed by the Scholz government to replace with modern Western equipment the Soviet-made tanks that Eastern European countries are sending to Ukraine. Duda publicly accused Berlin of going back on its word by sending them Leopard main battle tanks in exchange for their Soviet-era T-72s.

Once again, the Polish president was very vehement in his criticism of Germany. He said he felt “cheated” and “very disappointed”. Members of the Scholz government assured that it had been “a misunderstanding.” A spokesman had to deny that any agreement had been reached. According to his explanation, he had simply talked about that possibility. “They were told that in principle yes, but that we would have to look at what we can supply,” he said. According to the Ministry of Defense, the German Army, underfunded for decades, actually has few Leopard tanks than Warsaw asks for and if it were to dispose of its stock it would be left unprotected. In another operation Ringtausch With the Czech Republic, Germany has indeed sent Leopard tanks, but of the 2-A4 model, manufactured in the 1980s and less advanced than the ones Poland wants.

Without cows (alive) in the capital: the Mercado de Liniers leaves Buenos Aires after 121 years | International

Boric has his first major confrontation: he orders the police to clear the routes blocked by truckers | International
April 27, 2022

Boric has his first major confrontation: he orders the police to clear the routes blocked by truckers | International

Argentina pays ten life sentences for crimes committed in Campo de Mayo, the largest clandestine center of the Army during the dictatorship
July 7, 2022

Argentina pays ten life sentences for crimes committed in Campo de Mayo, the largest clandestine center of the Army during the dictatorship

Chile: Easter Island is left without tourism: “The situation is one of collapse” | International
April 16, 2022

The death of a young woman detained for wearing the veil wrong provokes a wave of protests in Iran | International
September 18, 2022