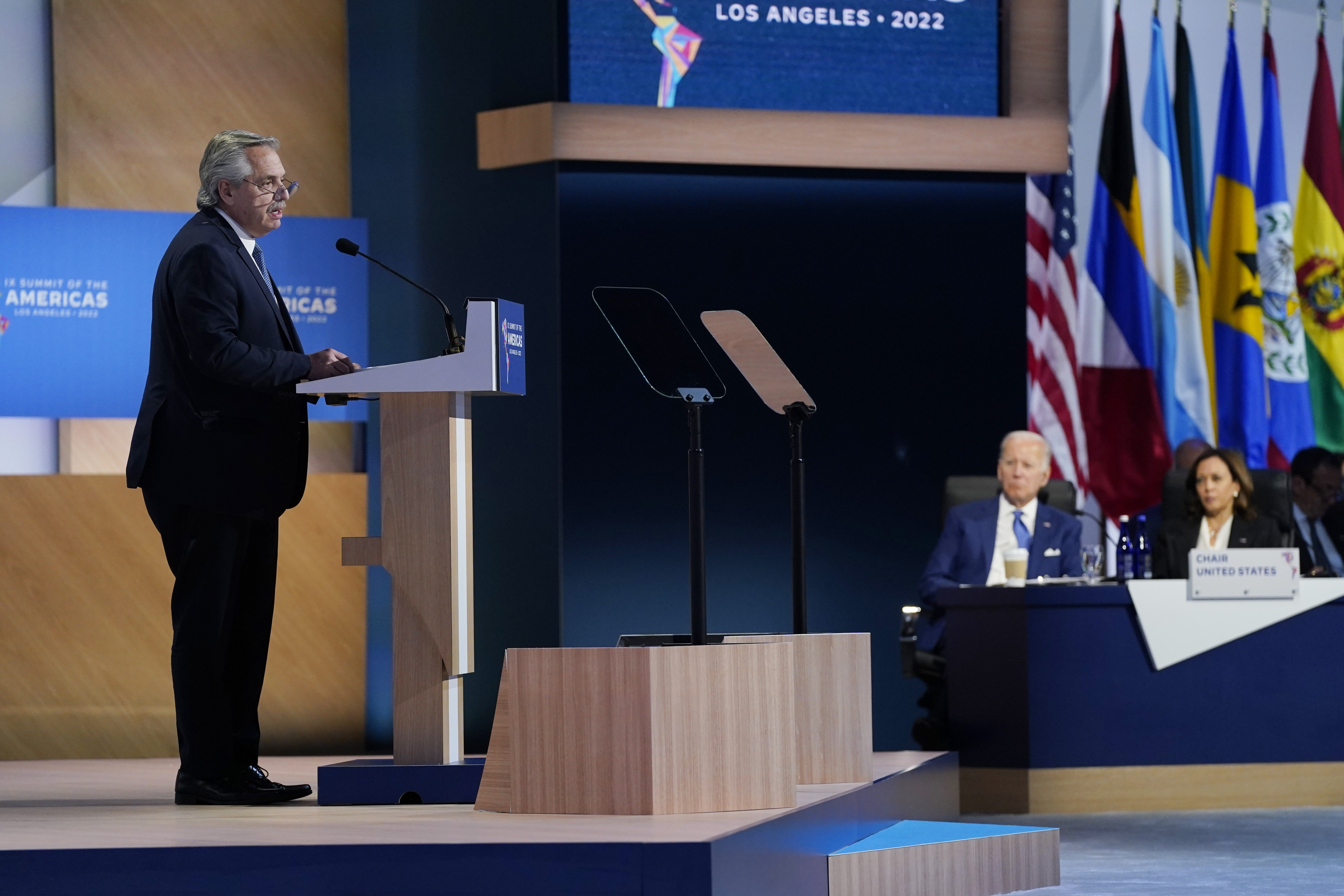 The Summit of the Americas cannot get off the ground and forget the controversy over the guest list. In the first plenary session, despite the fact that the president of the United States, Joe Biden, has offered a stage of cooperation far removed from the postulates of his predecessor, Donald Trump, he has encountered open criticism from the president of Argentina, Alberto Fernández , the other most prominent figure on the first day: “Being the host country does not grant the ability to impose a right of admission”, he snapped at Biden, sitting a few meters away, from the lectern.

Fernández’s intervention has been highly critical of the role of the United States in the politics of the region. In the most immediate, the Summit, the president of Argentina has insisted from the beginning of his speech. “I’m sorry that not all of us who should have been present were able to be present”, were almost his first words. He was referring to the veto imposed by Washington on the presence of the Governments of Cuba, Nicaragua and Venezuela for being non-democratic regimes. That veto has caused the absence of the presidents of Mexico, Bolivia and Honduras and the criticism of many more.

After criticizing the sanctions against Cuba and Venezuela, the Argentine president has returned to the fray: “Definitely, we would have wanted another Summit of the Americas. The silence of the absent challenges us. So that this does not happen again, I would like to make it clear for the future that the fact of being the host country of the Summit does not grant the ability to impose a ‘right of admission’ on the member countries of the continent. Dialogue in diversity is the best instrument to promote democracy, modernization and the fight against inequality”.

Fernández has asked the Biden government to “open up in a fraternal way” after Donald Trump’s “immensely harmful policy” for the region. “It is time for those policies to change and the damage to be repaired.”

The Argentine president has made an amendment to the entire US policy towards Latin America. He has said that the OAS has been used “as a gendarme that facilitated a coup in Bolivia”, that the United States has “appropriated” the direction of the Inter-American Development Bank (IDB), historically in Latin American hands. He has accused Trump of disrupting the rapprochement with Cuba and of intervening with the IMF to facilitate the Macri government’s unsustainable debt and try to prevent him from winning the elections: “The entire Argentine people suffer today because of such indecency.” He has asked to reform the OAS, dismissing its directors and also to capitalize the IDB and return it to Latin American hands.

Fernández, who has been criticized for a lukewarm response to the Russian invasion of Ukraine and his questioning of the sanctions, has said that “it is urgent to build negotiation scenarios that put an end to the war catastrophe, without humiliation or desire for domination, without dehumanized geopolitics or privileges of violence”. He has not spoken words of explicit condemnation of the invasion. He has indeed proposed taxing “the unexpected income that the war gave as a gift to large food, oil and arms corporations.”

Later, but in reference to his diplomatic claim on the Malvinas Islands, he stated that Argentina is a peaceful country: “After the tragedy of the pandemic, we see wars as the triumph of human insensitivity,” he said.

“President Biden, I am here trying to build bridges and tear down walls”, he stated at the end of his speech.

President Biden has preferred to see the glass half full: “Despite some disagreements on participation, on substantive issues, what I heard was an almost unified response,” he said in reference to the set of interventions and substantive issues on migration, environment, financing and recovery.

Earlier, in his opening speech for the plenary session, Biden had stressed that his proposals for the region are light years ahead of Trump’s. The president of the United States offers economic, commercial, food, health and ecological cooperation, as a way to promote development and also to deal with the migratory crisis, for which he will request a shared responsibility this Friday in a declaration.

“We have the opportunity to find ways to do what is best for all of our people, working together. And I emphasize together, together. That is what our people expect of us. And it is our duty to show them the power of democracies to comply when democracies work together”, he said, reiterating the call for unity from the day before, at the opening ceremony, but making it clear once again that it is a unity between democracies.

Biden has referred to the Declaration on Migration and Protection that is signed this Friday, stressing that its objective is to “increase opportunities for safe and orderly migration, take action against criminals and human traffickers who prey on desperate people and coordinate specific concrete actions to secure borders and solve common challenges”.

“There is no reason why the Western Hemisphere cannot be the most progressive, most democratic, most prosperous, most peaceful and most secure region in the world. We have unlimited potential. We have enormous resources and a democratic spirit”, he concluded his speech. “No matter what has happened in the world, the Americas have always been a priority for the United States.”

NATO drags Europe into the US geostrategic struggle with China | International

Mobilization in Russia: Before the black mirror of defeat | International

Video analysis | What scenarios are there for Brazil after the elections? | International
October 1, 2022

Video analysis | What scenarios are there for Brazil after the elections? | International

Trump goes to the Supreme Court to block the investigation of the Mar-a-Lago documents | International
October 5, 2022

Biden will stop applying the ‘Stay in Mexico’ program for immigration | International
August 9, 2022

Simone Tebet: The third most voted candidate in Brazil gives her support to Lula for the second round | International
October 6, 2022

Simone Tebet: The third most voted candidate in Brazil gives her support to Lula for the second round | International

Silas Malafaia: “The Workers’ Party wants to return to the scene of the crime” | International
September 29, 2022

Silas Malafaia: “The Workers’ Party wants to return to the scene of the crime” | International

Italy: Meloni: “I have never had sympathy for fascism” | International
October 25, 2022