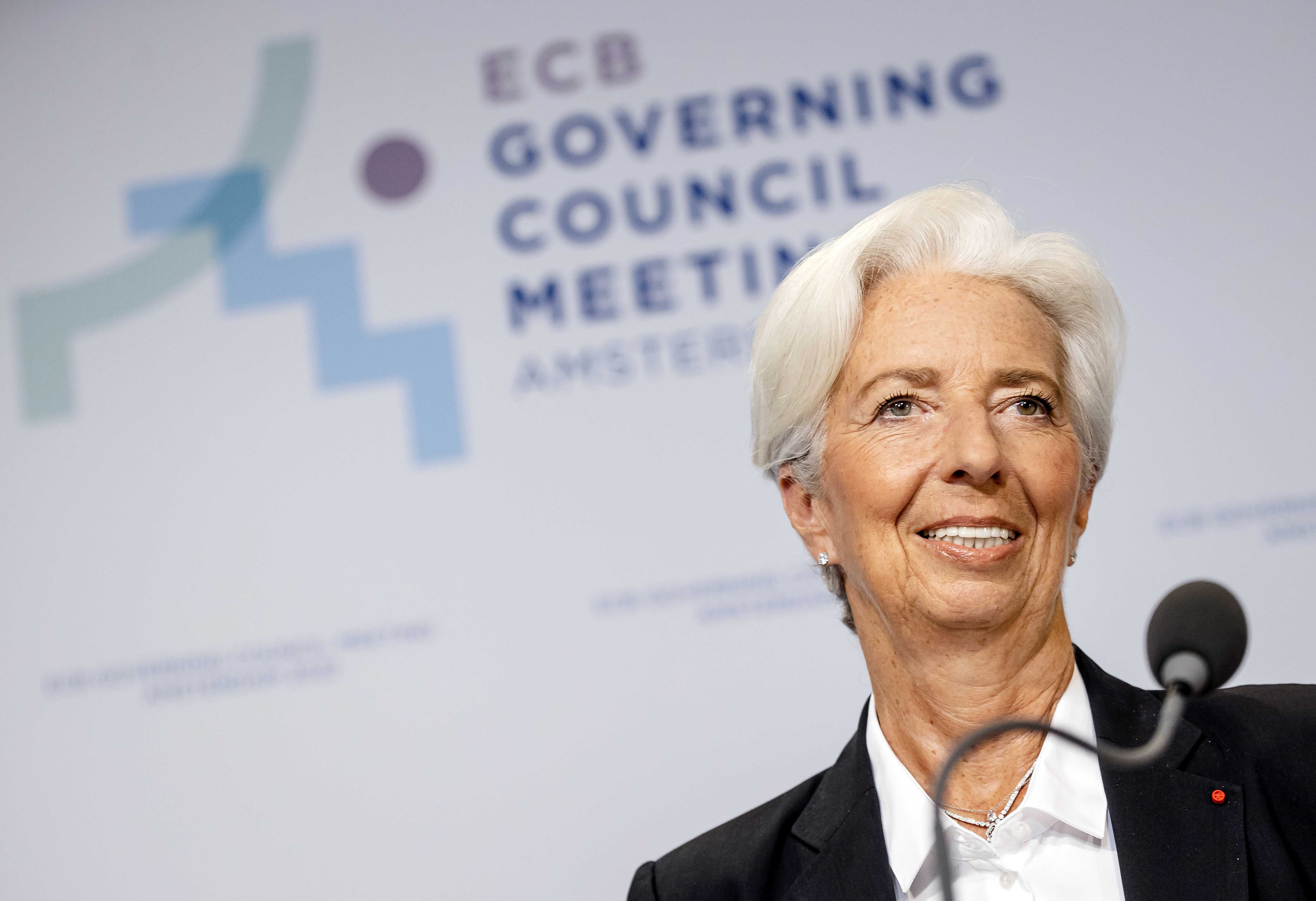 The year 2022 will be the year of the end of an atypical monetary policy in the Old Continent. The European Central Bank (ECB) will begin in July the normalization of interest rates with the first increase in 11 years, of 0.25%, and another increase is saved for September that does not rule out that it is even higher, as announced this Thursday its president, Christine Lagarde.

Thus, by the return of summer, the era of negative rates will have closed, something that did not enter any pool but has been maintained for eight years. The turn of the rudder was foreseeable and will affect the pockets of consumers: on the one hand, with increases in financing costs, which can curb spending. And also with other positive effects such as the return of the return on deposits or if it manages to moderate inflation. Although the Eurobank clarifies that these effects will not be immediate with the first rise of 25 basic points.

Where the rise in rates will be noticed first is in mortgages. In fact, it has been doing so for a quarter, when the market began to discount the increases due to the messages that the ECB sent. The indicator to which most of these loans are referenced is the 12-month Euribor, which returned to positive in April. “It has been growing for months because the market discounted these increases. This will affect the typical Spanish family, because they have the mortgage as their biggest expense”, explains Leopoldo Torralba, an economist at Arcano Economic Research. A trend that is not going to stop now that the Eurobank calendar already exists.

Despite this, it is necessary to distinguish between different mortgages, since it will not affect all of them equally. On those that already exist, the blow will be suffered by those that have a variable rate and are referenced to the Euribor. According to the Spanish Mortgage Association (AHE), at the end of 2021 Spain had 5.5 million live mortgages and three quarters (4.1 million) had variable interest. And it is estimated that the majority of variable loans (around 90%) are linked to the 12-month Euribor. This means that fees are recalculated periodically (usually once a year) based on how the index has changed since the last review. And that, with the passing of the months, will end in an increase in the cost of these credits. Compared to the previous year, last December the Euribor ended at -0.502%, the second lowest average in history. Nothing to do with what is expected for this year, as it is already in positive territory and it is on the rise. “The market expects a 12-month Euribor of around 2% to be reached by 2024, with a gradual rise until it gets there,” recalls Torralba.

Fixed-rate mortgages already contracted are exempt from these fluctuations. However, the new ones that are formalized now will also pay for this increase, since the banks have worsened these offers and improved the spread on variable-rate mortgages to protect themselves from the increase announced by the ECB (and from what is to come) .

Consumer credit will be the other major section in which an increase in spending will be felt. In short, everything that involves requesting financing will become more expensive, hence the risk that an abrupt rise will put a brake on consumption and, therefore, on the economy. In the case of these loans, of lesser amount than mortgages, their price will not increase due to annual reviews, since these usually have a greater fixed component.

Despite this, the blow will come. And it will do so in those that are granted from now on, which will have a higher differential than the current one. “It will affect new loans because their price is set based on interest rates,” adds Torralba. A setback that will also be felt in companies with a reduction in their investment capacity.

Up to this point, all the elements had in common an increase in costs as an effect of the rate hike. However, there will be sections that if the theory is fulfilled will end up benefiting consumers. For example, those who have savings. If for people who are in debt – or need to do so – it will mean a higher expense, for savers the rate hike will be an oxygen cylinder. “They are two sides of the same coin: while some pay more for their liabilities, others will receive more money with low-risk assets,” explains the Arcano economist.

In this way, the return of profitability on deposits will be accelerated. As well as other investment alternatives, among which the State bonds stand out, which will regain attractiveness by paying higher interest —the reverse of this is that it will cost the public coffers more to pay the debt, as is already reflected in the growth of the premium risky-. This, in practice, will encourage savings, something that until now was penalized: it will be more attractive to keep that money stranded with a guaranteed return rather than moving it towards higher-risk investments or dedicating it to consumption.

The main reason for the rate hike is to contain skyrocketing inflation, especially due to the energy crisis generated since Russia’s offensive on Ukraine. “High inflation is a great challenge for all of us. The Governing Council will ensure that it returns to its medium-term target of 2%,” Lagarde began in her speech on Thursday. In Spain, the CPI ended the month of May at 8.7% compared to the previous year, four tenths more than in April.

The new ECB forecasts indicate that average inflation in the euro zone for this year will be 6.8%, will drop to 3.5% in 2023 and 2.1% in 2024. A scenario in which, according to the Theoretically, the rate hike should help achieve that objective of keeping the increase in prices around 2%. “The number one priority is to fight against inflation, which impoverishes us in the present and conditions our future,” says a spokesman for the Spanish Banking Association (AEB).

On paper it seems very simple: it is about raising rates to a neutral rate. That is, the one in which it does not boost the economy, but does not depress it either. A very difficult balance to achieve and in which any misstep by the central banks or past braking could derail economic activity. Hence the continuous messages from the Governor of the Bank of Spain, Pablo Hernández de Cos, who calls for a process of raising rates “gradually”, avoiding “abrupt movements”.

Thus, the rate hikes that the Eurobank initiates in July is a very complex cocktail. On the one hand, it will reduce consumption and investments. And on the other hand, it will make savings more profitable and help moderate inflation. The question is to know if the increase in rates manages to lower the CPI so much as to compensate for the increase in costs that it will entail for indebted households. “The balance will be that the increases are not exaggerated and allow inflation to be lowered without excessively deteriorating the economy,” summarizes Torralba. All this with a background risk: the threat that it will weaken job creation and the economy as a whole at a time of great uncertainty due to the war in Ukraine.

Have the ratings been announced? Who was the first in the rating results of October 14, 2022?

What is a carbon footprint and how to reduce it?

Meeting with Rishi Sunak, the new Prime Minister of the UK, with US President Biden

Shooting in Texas: Uvalde, the town that changed children’s laughter for silence: “The duel will last for years” | International

All pending Nord Stream: the ‘D-day’ of the European gas war | International
July 21, 2022

All pending Nord Stream: the ‘D-day’ of the European gas war | International

A sadness without tears or tragedies | International
September 10, 2022

A sadness without tears or tragedies | International

Russia bombs a Ukrainian base 25 kilometers from Poland with missiles and increases tension with NATO | International
March 13, 2022

Letter from a journalist on his 90th birthday: could it be true that the past times were better? | International
July 23, 2022

Letter from a journalist on his 90th birthday: could it be true that the past times were better? | International

18 dead in a police operation in a group of favelas in Rio de Janeiro | International
July 22, 2022

Afghanistan, through the car window | International