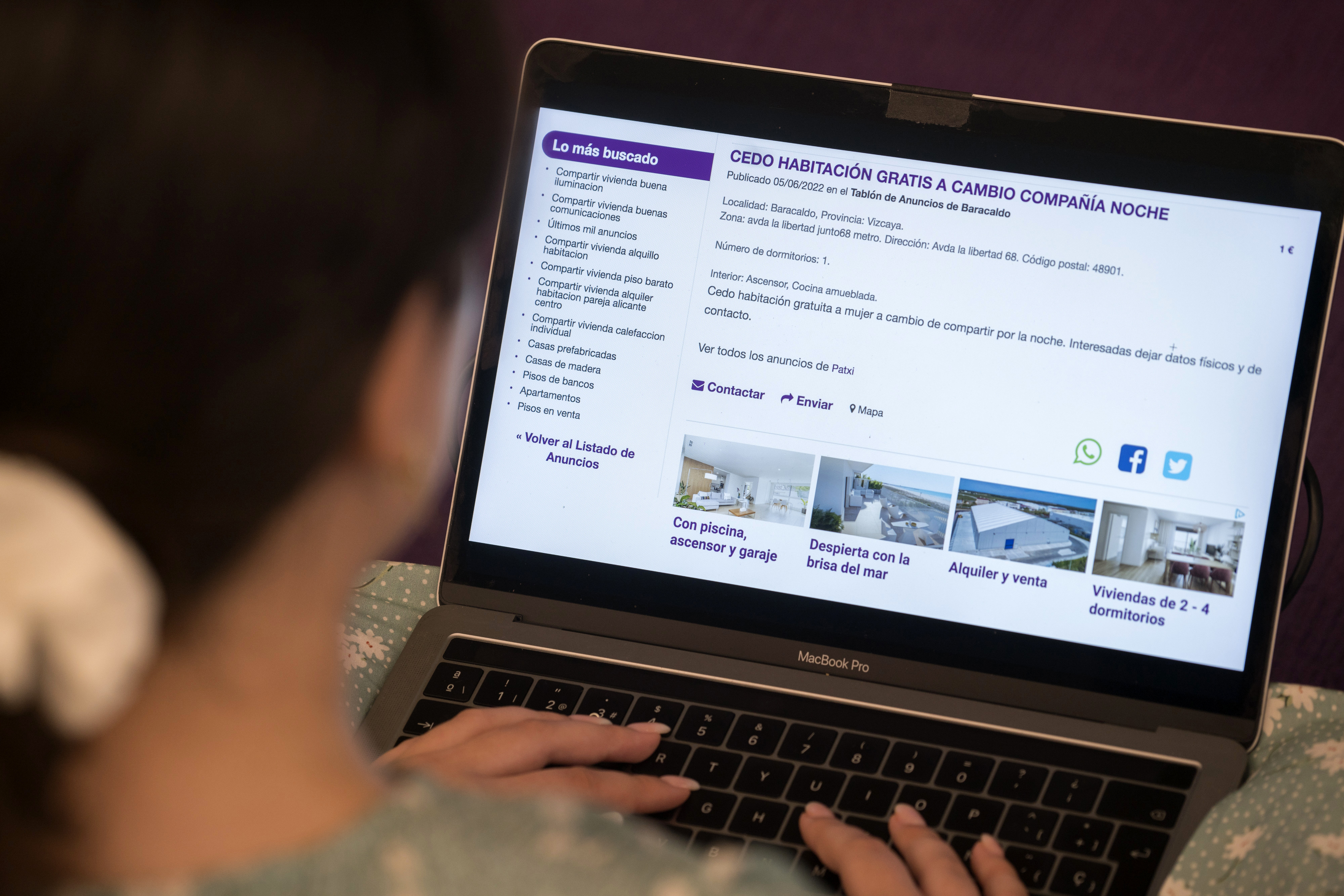 “I give a free room to a woman in exchange for sharing for the night. Interested leave physical and contact information. It is one of the ads that proliferate on internet ad platforms. It is the renewed, more subtle version —although it is basically the same— of those who offered free accommodation in exchange for sex and who appeared just when the housing market was most overheated, back in 2007 and 2008. Not now they are so explicit, although they leave no room for doubt about the object of their offer. In all the ads found on different digital portals, the term “company” is used. Despite this, anyone who exchanges some messages with advertisers understands that it is not about accompanying or caring, but about pure and hard sex in exchange for a room.

These kinds of ads have always existed, with more or less frequency and intensity, but they tend to proliferate when the rental market gets too tough. Now it is. Rents have risen again strongly after the respite from the pandemic. The rental price in Spain rose by 4.7% in April, according to Fotocasa. In the city of Madrid, for example, the average rent is 1,164 euros per month. This is the breeding ground for these advertisements, which permeate among people with greater economic needs and unable to afford the payment of a room: in the big capitals it costs from 300 to 700 euros per month. Migrant women without papers are cannon fodder due to their special vulnerability.

The first thing these advertisers ask for when this journalist contacts them (without revealing her real identity) is age and a photo. The person responsible for one of these ads asks for a face-to-face meeting as a prerequisite to give more details and talk about the conditions of the barter. He wants it to be the same day that the first communication takes place and warns that he already has people waiting. He prefers face to face. “You know that things spoken like this seem cold and, without knowing each other, more. Then it’s different.” He sends a message that is intended to be reassuring: “Don’t worry, I’m legal and polite. I am Spanish”. Asked if the room is free, he replies: “Sure, it’s up to you.”

Another of these ads says: “Spanish man, 55 years old, divorced, I live alone, I give a room to a girl for free and I also offer 300 euros a month in exchange for her taking care of the house and having time to keep me company”. In this case, the advertiser — who admits to being 60 years old and not 55 — requests a photo and asks for age. He says that his former assistant, a Venezuelan woman with significant economic difficulties, was paid about 500 euros a month for cleaning the house and for having intimate relationships. “We can get to know each other and if we like each other I could give that same amount to you.”

The National Police has no record of complaints related to these announcements of exchange of roof for “company”. And since it is an agreement between two freely consenting adults, it would not be reportable and cannot be considered a crime. Now, if that turned into threats, coercion or deceit, which in principle does not happen, it could be considered criminal activity.

Criminal lawyers speak of applying common sense and distrusting any product or service when it is too cheap or manifestly out of the market. More when so many clues are given, as in these cases. However, in very extreme situations, in situations of extreme need, it could even be considered a crime of trafficking in human beings (article 177 bis of the Penal Code). The advertiser should take advantage of a situation of superiority or need or vulnerability of the victim, welcoming her in exchange for sexual exploitation, including pornography. The casuistry is very varied. For example, one could speak of the commission of this crime if war refugees are welcomed in exchange for sex.

The influx of these advertisements coincides with the legislative debate on prostitution, which took place this week in the Congress of Deputies. The Coalition Government has two comprehensive laws in the pipeline to address pimping, trafficking for sexual exploitation and prostitution.

From the civil point of view, the logical thing is that there be a verbal agreement between the parties. “The written contracts that may exist in relation to this matter will surely include other benefits: cleaning, cooking or simple company, but never sexual”, explains Josep Maria Güell, from the Habitat Abogados office. The lawyer realizes that these are relatively common actions in other countries, such as France.

In the consumer organization CECU, which has not received complaints or complaints related to this type of advertisement, they believe that “a collective and institutional effort should be made so that housing is an affordable good for everyone and that there is no one who is forced to have to accept such an agreement out of sheer desperation.” They warn: “Even if this agreement is reached and a contract is signed, the offer to use a home without paying rent is not a lease as such, but a precarious rental. Thus, it is outside the provisions of the urban lease law and can be revoked at any time. If a woman agrees to this type of agreement out of necessity, not knowing what she agrees to or simply changes her mind, she can cancel the agreement at any time.

Portals such as Milanuncios, which do not mediate transactions between users, do not allow advertisements related to contacts or the exchange of goods and services in exchange for sexual relations. For this reason, and to avoid the filters applied by platforms like this, the term company is used. “We have zero tolerance with all kinds of conduct that threatens or may violate human dignity,” they point out in Milanuncios. “When they are detected, we delete them and, if appropriate, we block the user’s account,” they add.

Intimate relationships are not the only pay card. There are ads of all conditions. The most common is house cleaning and care for the elderly, but there are also those who demand and offer yoga and language classes, services of a nutritionist, handyman… Anything goes in a market, that of rent, that strangles to the most vulnerable.

What is the biggest economic ‘boom’ in the world? | Opinion

Macron proposes a European confederation broader than the EU to host Ukraine | International
May 9, 2022

Ukraine speeds up procedures to try to become a member of the European Union | International
April 18, 2022

Above and below: who counts and who disappears in the UK’s ‘Truss era’ | International
September 6, 2022

Above and below: who counts and who disappears in the UK’s ‘Truss era’ | International

Isabel II: The iceberg that ended up radiating warmth | International

São Paulo: The battle for the richest state in Brazil turns uphill for Lula’s PT | International