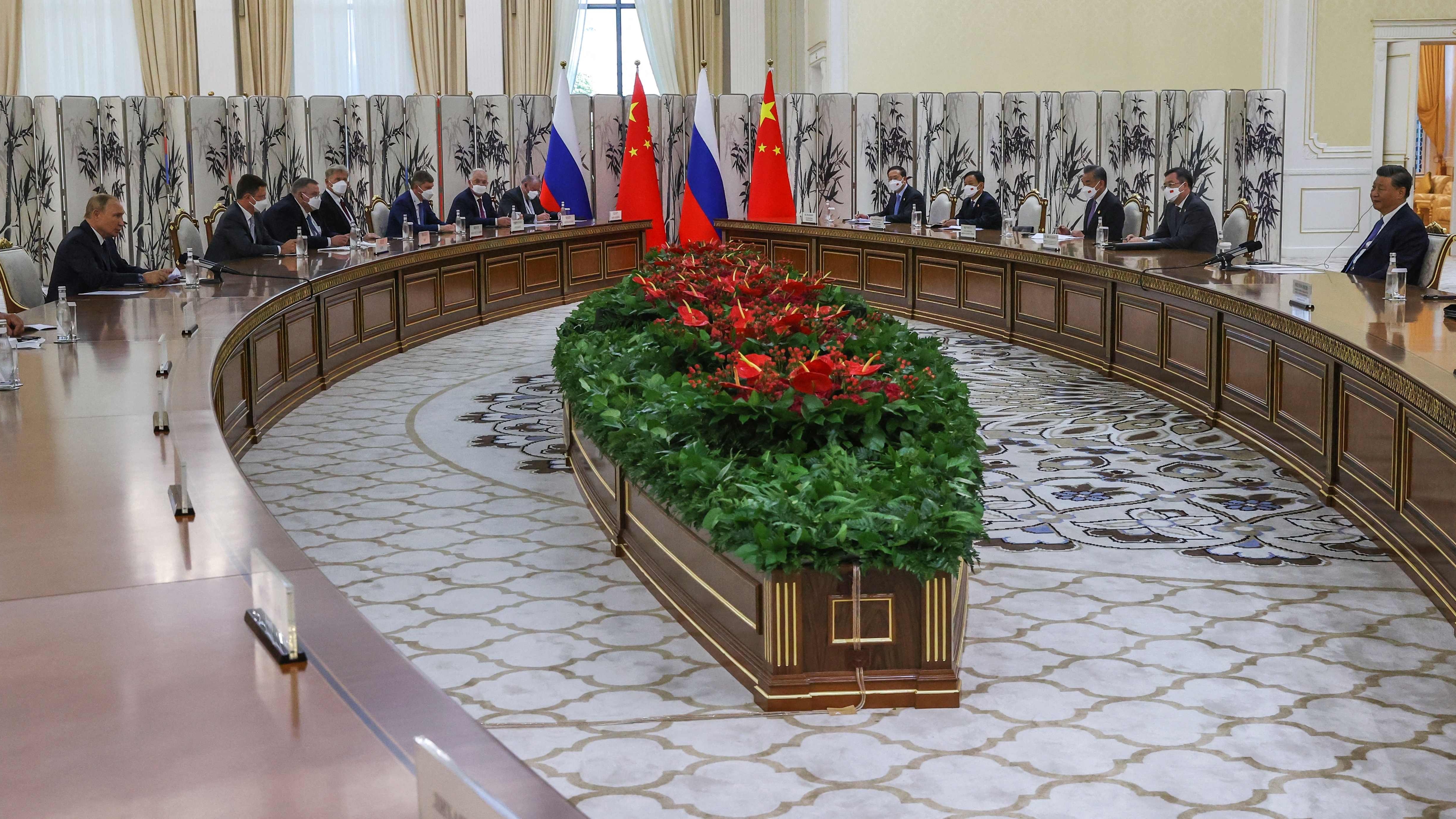 The president of China, Xi Jinping, and that of Russia, Vladimir Putin, held a meeting this Thursday in Samarkand (Uzbekistan), their first face-to-face since Moscow decided to invade Ukraine at the end of February, turning the geopolitical scenario upside down. world. During the interview, the content of which began to be revealed in mid-afternoon (Uzbekistan time), the Russian denounced Western attempts to create a “unipolar world” and praised Beijing’s “balanced position” on Ukraine. Xi has replied that his country is willing to work with Russia “to assume its responsibility as a great power, play a leadership role and inject stability and positive energy into a world plagued by chaos,” AFP has collected.

The expected confrontation has taken place on the margins of a summit of the Shanghai Cooperation Organization (SCO), an organization born after the disintegration of the Soviet Union, focused on security issues, and of which they are partners, in addition to Russia. and China, Kazakhstan, Uzbekistan, India, Kyrgyzstan, Pakistan, and Tajikistan. Putin has also called on Xi to strengthen this institution, according to Reuters.

The Russian leader, for whom the European doors have been closed, has arrived at the meeting in the heart of the ancient Silk Road with his face already turned towards Asia, in search of support from Beijing at a critical moment in which his troops lose ground to the Ukrainian counterattack and suffocation grows in the face of international sanctions. For Xi, the trip itself is already an event: it is part of his first trip abroad since the start of the pandemic, and his reaction to the meeting could serve almost as a thermometer of his degree of adherence to the regime. Putin.

The last time the two leaders met, on February 4, the result of the interview was similar to the first jolt of an earthquake: Beijing and Moscow signed a declaration in which they questioned the current framework of relations between world powers and enshrined a “friendship” that “has no limits” or “prohibited areas of cooperation.” Just 20 days later, Russian tanks crossed the Ukrainian border. Since then, the Chinese government has maintained a calculated distance from Moscow, without providing material or military support, but at the same time without condemning the invasion.

This tilted neutrality towards Russia leaned a little more last week, when Li Zhanshu, one of the highest leaders of the pyramid of power in China – number three in the Permanent Committee of the Political Bureau, the highest organ of the Party – showed his support during an official visit to Russia: “On the Ukraine issue, for example, the United States and NATO are expanding directly at the gates of Russia, threatening the national security of Russia and the lives of Russian citizens”, recognized before a group of legislators from this country, according to a video released by the Russian Duma. “Given the circumstances, Russia has taken the necessary measures. China understands this and we are coordinating on various aspects, ”he adds, according to the translation of the recording collected by Newsweek. “I think Russia was cornered. In this case, to protect the core interests of the country, Russia gave a resolute response.”

Relations between two of the world’s greatest powers have become a source of growing angst in Washington and Brussels. The tension around Taiwan, the self-governing island that China considers an inalienable part of its territory and that the West sees as a potential conflict similar to Ukraine, has raised the level of agitation and anxiety to new heights, especially after the visit to Taipei. in August by Nancy Pelosi, Speaker of the US House of Representatives, which has provoked an enraged response from Beijing and has led the People’s Liberation Army into the Strait of Formosa.

The Taiwan crisis has also flown over the meeting between the leaders. Putin has wanted to align the position of both countries by condemning “the provocations of the United States and its satellites in the Strait” and has assured that Moscow intends to adhere to the “one China” principle, the complex linguistic and political balance that for Beijing means that there is only one China, led by the communist government, and Taiwan is an inalienable part of that territory; while for other governments, such as the United States, it implies that Beijing is the legitimate government of China, but the status of Taiwan is not defined.

The narco advances in indigenous lands of the Peruvian Amazon | International

York: Police arrest an activist who has thrown eggs at Carlos III and Camila | International
2 weeks ago

Brazil Elections 2022: Bolsonaro redoubles his attacks on electoral justice in the final stretch of the presidential elections | International
4 weeks ago

Brazil Elections 2022: Bolsonaro redoubles his attacks on electoral justice in the final stretch of the presidential elections | International

The return of cholera increases the crisis in Haiti
October 11, 2022

The return of cholera increases the crisis in Haiti

The trump cards of kyiv and Moscow for a prisoner exchange: a Putin ally for two foreign fighters | International
April 18, 2022

The trump cards of kyiv and Moscow for a prisoner exchange: a Putin ally for two foreign fighters | International

Northern Ireland needs a reinforced dose of pragmatism | International
May 12, 2022

War in Ukraine: An overwhelming prospect of crisis | Opinion
May 14, 2022

War in Ukraine: An overwhelming prospect of crisis | Opinion

Trump lashes out at Biden, the FBI and the media at his first post-registration rally | International
September 4, 2022

Trump lashes out at Biden, the FBI and the media at his first post-registration rally | International

Félicien Kabuga: The trial begins against the businessman accused of promoting the genocide in Rwanda in 1994 | International
September 29, 2022

Félicien Kabuga: The trial begins against the businessman accused of promoting the genocide in Rwanda in 1994 | International

Russia plans to buy ammunition from North Korea for use in Ukraine, US says | International
September 7, 2022

Russia plans to buy ammunition from North Korea for use in Ukraine, US says | International