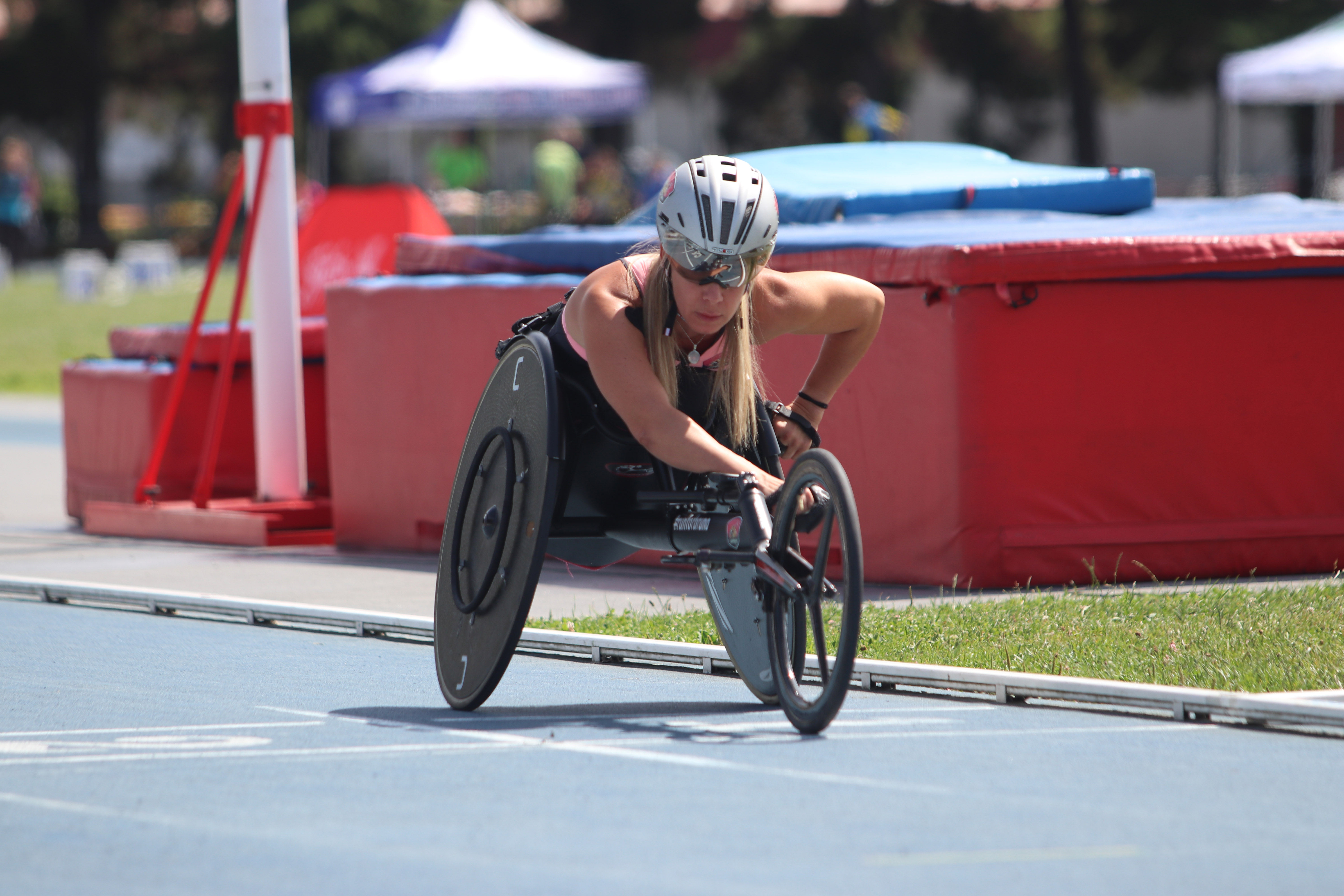 The story of Carmen Giménez, Spanish champion of adapted athletics in 800, 1,500 and 5,000 meters, is difficult to ignore. Almost impossible, because she did it as a double survivor: first, after surviving, in 2010, an episode of sexist violence – her ex-partner threw her out a third-floor window – which caused her a spinal cord injury and left her in Wheelchair; and second, due to the death of her son Bruno, in 2018, as she was unable to overcome respiratory complications derived from her premature birth. But it was precisely this episode that pushed her towards practicing sports and promoting the project #RunForYou (run for you), an initiative to give visibility to adapted athletics that seeks to promote a more inclusive sport and society. Starting this week, she is also an ambassador for the Adecco Foundation, where her testimony will serve to address the dual challenge of labor inclusion of people with disabilities and women victims of gender violence.

“The main barrier that currently exists are unconscious biases, that is, the prejudices that end up becoming a great weight in the backpacks of the four million people with disabilities in Spain,” says Francisco Mesonero, general director of the Adecco Foundation. Disability, he adds, continues to be associated with a negative and incapacitating vision, when in reality “it is not found in people with disabilities, but in the society that relates to them.” A discrimination that is also linked to the prejudices that prevent the full incorporation of victims of sexist violence into the labor market: according to the report Gender violence and employment of the Adecco Foundation, almost three out of four unemployed victims of this type of violence prefer not to communicate their situation in job interviews, for fear of being discarded due to prejudices that associate them with insecure, conflictive or absentee personalities.

The reality, however, is quite different, because the victims are aware that employment can help them get ahead, giving them self-esteem, economic independence and even an increase in their network of contacts; and all this means that their loyalty and business commitment are above average. “They are also people who have developed a series of extraordinary emotional skills, as well as a great ability to overcome obstacles,” says Mesonero.

Disability or the condition of victims of violence are just two among a more numerous list of factors of vulnerability and discrimination in access to employment, such as age, race or origin of people. For this reason, Giménez indicates, the important thing is “to break with that dynamic. You have to recognize your circumstances, whatever they may be, to later show that those elements of vulnerability can become factors of strength: I have managed to be champion of Spain and have the record of 5,000 with a disability. It is necessary to champion and defend that the factors of each person do not define you in a negative sense, but rather are characteristics that you can use in a positive way and achieve your goals. Not despite those circumstances, but thanks to them.”

Because inclusion, he argues, “is a path of no return” that contributes to normalizing the presence and importance of this group. “When you try to live in inclusive environments –and it doesn’t matter if it is in the workplace, sports or personal–, there is no turning back, because you feel firsthand how enriching diversity is. Above all, because it has a bidirectional sense. When, for example, I run in Madrid with 30,000 other people, I feel grateful for participating with the rest of the runners, who later, when I go ahead in my chair, cheer me on. But it is that later many have told me that I have given them strength to continue”.

Some arguments that, on the other hand, are also valid in the workplace, where companies are increasingly aware of the value that diversity has for their teams. “The great challenge is equal opportunities and social and labor inclusion. The visible commitment of the first line of management of the companies is necessary, which must be convinced that giving opportunities to these people will result in a greater capacity of the organizations to respond to the society in which they act, in addition to strengthening the corporate values ​​at a time when technology and big data they have blurred human potential,” says Mesonero. Giménez, together with the rest of the ambassadors of the Adecco Foundation, participate in the meetings for diversity, an initiative that they have been developing since 2008 with the aim of giving a voice to people with disabilities, so that with their stories and experiences they can normalize their circumstances and access the labor market under equal conditions.

Long before entering the elite of adapted athletics, Carmen Giménez’s routines were nothing like those of today. But 2010 arrived and, with it, the macho aggression that would change her life forever. An extremely painful episode that was not only painful because of her injury, but because of a whole legal process that would culminate in a dismissal due to lack of evidence, and with her aggressor going completely unpunished. “It was all a horror, because no investigation was done until I left the hospital and reported it. No one had investigated anything at all… It was a whole year of instruction and a great lack of empathy and approach towards the victim”, she recalls. The successive appeals were useless: to the Provincial Court, to the Constitutional Court, Strasbourg… “Even to the ombudsman. And if it were the only case… But, if you look at the general report of the Judiciary, you see that 42% of the cases are archived, most of them due to lack of evidence. And it’s a fact from last year.

The death of her son Bruno, on September 4, 2018, was what would end up bringing her closer to the world of sports. Carmen went into labor prematurely (at 34 weeks), so she called 112 up to four times. “It took 62 minutes to arrive, but by then my son was already born. And of course, a premature baby does not yet have enough lung capacity. She ended up going into cardiorespiratory arrest and dying at eight hours.” One more tragedy that, however, had a hopeful consequence. “At that time, I had friends around me who were running and who wanted to make me feel that Bruno was still with us. And they decided to serigraph his foot prints, which they had put in the hospital on cardboard. They created the hashtag #RunForBruno and they started running marathons: Rotterdam, Florence…”

They ended up encouraging her to run herself, an idea that did not convince her at first but that became a reality thanks to the help of Roberto Álvarez, her coach and selector for Madrid of the Athletics Federation. “That’s when I realized how tremendously complicated it was, for people with disabilities, to be able to do something as simple as playing sports and running, which for most is putting on some sneakers and going out,” she says. Some difficulties that are explained by the enormous amount of resources required. Competition wheelchairs, for example, are not manufactured in Spain, and must be imported from countries such as the United States, the United Kingdom or Japan, at a cost of around 5,000 or 6,000 euros, to which expenses must be added. shipping.

“I felt that my son was leading me down that path, and that a very nice way of keeping him in mind and giving meaning to his life was that he could help other people,” says Giménez, via videoconference. From that thought came, first, the project to create an inclusive athletics club, Run for You, which today has about 40 licenses (of which 15 are for athletes with disabilities), and later the foundation of the same name. Through it, they provide the necessary material means so that running is a right and not a luxury, such as athletic chairs for beginning athletes, access to sports facilities and coaches who guide them in sports practice in a directed, in order to avoid injuries that, in his case, could aggravate his situation.

Today, Giménez continues to train for his next sporting commitments. Although she acknowledges that she has never felt discriminated against, and highlights the support she has received at all times from the Madrid Athletics Federation, there are sometimes problems and a lack of empathy, as is happening now with the organization of the Valencia marathon, to be held on December 4. While the norm, in events of this type, is to let wheelchair athletes start earlier, for safety and organizational reasons, this year’s regulations contemplate that they start in a second wave. But there is still more: “The treatment is discriminatory from the beginning, because while my companions and companions on foot who are, like me, champions of Spain in their modalities, the organization invites them to run, provides them with the numbers, It covers their travel expenses and they have a salary, I have to pay for my bib number, my expenses and I have no salary at all”. And she wonders, “Why? Do I do less than 42 kilometers? Does it cost me less than others?

Worry about derelict buildings in Avcılar, Istanbul! They built walls on the doors

The Conservative Party explores how to speed up Boris Johnson’s departure from Downing Street | International
July 8, 2022

Nicola Lagioia: “Italy has not done accounts with fascism” | International

Elizabeth II dies: How to lose an empire without losing your composure | International
September 8, 2022

Elizabeth II dies: How to lose an empire without losing your composure | International

Assault on Capitol: “January 6 was the culmination of an attempted coup by Donald Trump” | International
June 10, 2022

Assault on Capitol: “January 6 was the culmination of an attempted coup by Donald Trump” | International

Why is it not yet known who has won the United States elections? | International
2 weeks ago

Why is it not yet known who has won the United States elections? | International

Kenji, the youngest of Alberto Fujimori’s heirs, is sentenced to prison in Peru | International
1 week ago

Kenji, the youngest of Alberto Fujimori’s heirs, is sentenced to prison in Peru | International