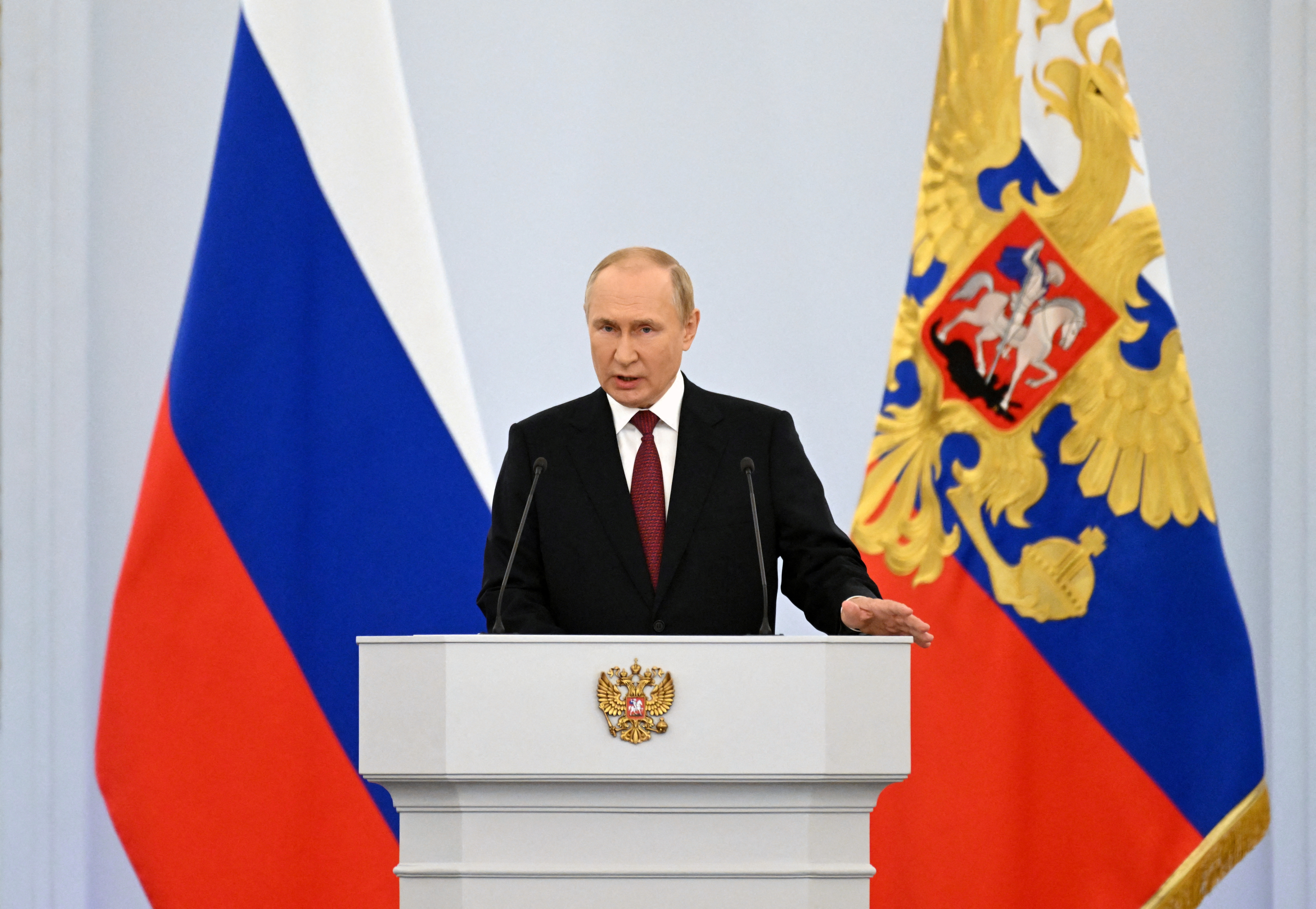 Russian President Vladimir Putin has opened a new phase in the offensive in Ukraine by proclaiming the annexation of the four illegally occupied provinces. With his annexation of a part of Ukraine, equivalent to 15% of the territory of the former Soviet republic, Putin has blown up the bridges to immediate peace. After the pseudo-referendums held in the occupied territories to justify the annexation, the president has demanded from kyiv “an immediate ceasefire and a return to the negotiating table”, although he has already advanced: “Russia will not address in the talks the return of Donetsk, Luhansk, Kherson and Zaporizhia”. The only thing that the Kremlin offers in return is the intention not to use its most destructive weapons in that battle: “We will defend our land with all the forces and means at our disposal and we will do everything possible to guarantee the safety of our people. This is the great liberating mission of our people, ”said Putin to the applause of his politicians.

It is the second time that Putin has announced an annexation of territory before his government and parliamentarians in the St. George room of the Grand Kremlin Palace. He already did it on March 18, 2014 in a longer speech, almost 50 minutes long, when the incorporation of Crimea opened the door to the war in Donbas.

Putin’s annexation coincides with the possible imminent fall of Liman, another strategic railway junction for the Russian Army located in the Donetsk region. Hours before Putin’s intervention, his spokesman, Dmitri Peskov confirmed to the press that they will try to control at least the two provinces at war since 2014. “The people’s republics of Donetsk and Luhansk are recognized by the Russian Federation within the borders of 2014 As for the territories of Kherson and Zaporizhia, I must clarify this,” he stated.

Kremlin-imposed authorities in the territories it controls concluded their pseudo-referendums on annexation to Russia on Tuesday. To give formality to a process that not even China recognizes, Putin signed on the eve of this ceremony the recognition of independence of these last two regions despite the fact that his authorities are a military administration imposed by himself.

To protect his gains, Putin last week decreed a mobilization to go to the front that has caused a stir in Russian society. A survey by the Levada sociological studies center carried out after the Kremlin order shows that 47% of Russians have experienced anxiety with the measure and 23% acknowledged being in shock. This has caused the percentage of people who are “very concerned about the Ukraine conflict” to skyrocket from 37% in August to 56% in September; while the population, which until now totally approved of the war, is divided between continuing it (48%) and beginning peace negotiations (44%).

The propaganda, however, shows the Russians massive support for this war. The Russian government organized a mass act in Red Square to welcome the annexed territories. However, some of those present have been forced there. “They have called all of us in the office to be there,” a woman who works in a company linked to international trade and prefers anonymity tells this newspaper. “Of course not,” she replies when asked if she can refuse.

Iranian exiles in Spain: “There I risked being hanged” | International

France: The end of the socialist party in Épinay | Opinion

The Buffalo shooting in pictures

Maps | Ukraine deals a “major defeat” to Russia in the east of the country | International
September 12, 2022

Neither reunification with China nor independence: Taiwanese prefer to stay as they are | International
August 13, 2022

Neither reunification with China nor independence: Taiwanese prefer to stay as they are | International

The French Government overcomes a motion of censure from the left supported by Le Pen | International
October 24, 2022